Coalition aims to naturalize more immigrants in US 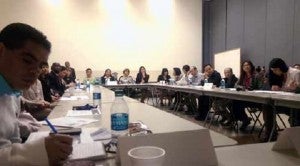 HOUSTON, Texas – When Thanh Bui took her US citizenship test, she was overcome with anxiety. The 78-year-old Vietnamese refugee was so nervous that she wasn’t able to answer the questions.

After failing twice, she started to wonder if she should give up on her dream of becoming a U.S. citizen.

That’s when she learned that the Vietnamese American organization Boat People SOS offered citizenship classes. She enrolled in the class and after a year, retook the citizenship test – and this time she passed.

But immigrants like Bui now face an added challenge: As of May 5, the citizenship application doubles in length, from 10 to 21 pages.

Some worry that this change could deter eligible immigrants from applying for citizenship.

Nationally, an estimated 8.8 million immigrants have green cards and are eligible to apply for U.S. citizenship – yet only 8 percent of them apply each year.

The challenge, say naturalization advocates, is to encourage immigrants to apply for citizenship even as the application form doubles in length.

“Across the country, this conversation is taking place… so that the 8.8 million people eligible to naturalize can get steps closer,” National Immigration Forum Executive Director Ali Noorani explained to a group of 50 media and community leaders at a roundtable in Houston earlier this month organized by New America Media.

His organization, along with local groups such as Boat People SOS, forms part of the national New Americans Campaign, which aims to make naturalization more accessible.

In Houston – now considered the most diverse city in the country — the stakes for immigrant communities could be higher than ever.

A 2012 Rice University study found that Houston comes closer to having an equal balance of Anglo, black, Asian and Latino communities than New York or Los Angeles.

The number of immigrants who live here and are eligible to apply for citizenship is estimated at nearly 300,000 in Harris County, according to Claudia Ortega-Hogue of NALEO Educational Fund.

That’s about one-third of the number of immigrants eligible to naturalize in the entire state of Texas (an estimated 930,000 people).

Asian non-citizens accounted for about 85,000 of the immigrant population in Harris County as of 2010. A conservative estimate puts the number of Asians who are eligible for citizenship here at 55,000 to 65,000, according to Rogene Calvert of OCA – Greater Houston.

Although the political impact of such naturalization is untested, Benito Juarez of the Mayor’s Office of International Communities with the City of Houston affirmed that the most important benefit of citizenship is the right to vote.

U.S. citizens can also travel freely, get federal government jobs and live free from the threat of deportation.

They can also petition for family members, a crucial right in a county where one in four residents is foreign-born.

For example, Jianqiang Cai, a 68-year-old father who immigrated from China in 2008, decided to become a U.S. citizen to give his two sons back in China the opportunity to come to the United States.

With help from the Chinese Community Center, Cai became a citizen in February and just submitted the application for his son to get a green card.

“I hope that my son comes to the U.S. very soon so that my family can be together again,” said Cai.

“The diversity of the city is reflected in the diversity we have at the table today,” Juarez told a group of media leaders that serve Houston’s African, Chinese, Latino, Vietnamese and other immigrant audiences.

“The community trusts the ethnic media,” said Juarez, adding that media that serve immigrant communities are crucial to help bridge the information gap that exists around citizenship.

“People have a lot of misconceptions about the citizenship process,” noted Julie Pasch of Catholic Charities of Galveston-Houston, one of the groups working to counteract the barriers that may be preventing immigrants from taking that step to become U.S. citizens.

For example, those who don’t speak English well may think that limits their chances of becoming a citizen. But if they have been here for many years, they could qualify to take the exam in their native language.

Others can take English classes to improve their writing and speaking. For example, Margarita García, a 57-year-old Salvadoran immigrant, said she was worried about her English ability, so she enrolled in a class and got help from caseworkers at the local organization Bonding Against Adversity. García, who is now a naturalized citizen and a voter, said becoming a citizen was “the most important” thing she ever did.

It costs $680 to file for citizenship, but immigrants whose income falls below poverty level qualify for a fee waiver.

That was the case of Romelia Say, a Maya-Quiche mother from Guatemala who came to the United States in 1989 to escape violence.

With help from Houston’s Guatemalan Peace and Development Network, she was able to get a fee waiver because she was unemployed and couldn’t afford the application cost. Say became a U.S. citizen last July, and a few months later, her two daughters became U.S. citizens too.

Those who don’t qualify for the fee waiver can get a loan through an innovative loan program – one of the first in the country — created by Houston’s Neighborhood Centers, Inc.

For $40 a month, green card holders can get a loan, which, in turn, “helps them build their credit,” explained Ana Laura Osornio of Neighborhood Centers, Inc.

Bui, who was joined by her son and representatives of Boat People SOS, encouraged other immigrants to enroll in citizenship classes and seek the free help offered by immigrant organizations in Houston.

Now, as the application form gets longer, naturalization advocates are redoubling their efforts – to let immigrants know that there is free and low-cost help available, from free in-language workshops to help people process their applications, to English and citizenship classes like the one Bui attended.

“We can’t do it without the help of the media,” said Juarez of the City of Houston.

2014—best time to become a US citizen