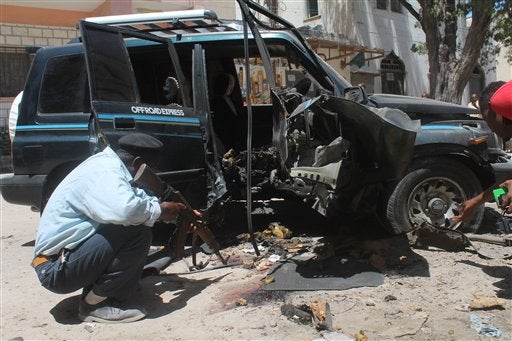 A Somali police officer looks at the wreckage of the car in Mogadishu, Somalia, Monday, April, 21, 2014. . A Somali police official said a legislator in the country’s parliament has been killed in the car bomb explosion in the Somali capital on Monday. Capt. Mohamed Yusuf said Monday that Isaq Mohamed Rino was killed after a bomb planted under his car exploded in Mogadishu’s Hamarweyne neighborhood. The blast also wounded another lawmaker, Mohamed Ali, who was traveling with Rino in the car. AP

MOGADISHU, Somalia—Two gunmen belonging to an Islamic extremist group shot and killed a Somali legislator Monday as he stepped out of his home in the capital, the second fatal attack on a member of parliament in as many days, police said.

Al-Shabab claimed responsibility in a radio broadcast for the attack on Abdiaziz Isaq Mursal. He was ambushed in the Madina district of Mogadishu, said senior police officer Ali Hassan.

On Monday legislator Isaq Mohamed Rino was killed in a car bombing that also wounded a lawmaker with whom he was traveling. Al-Shabab, which has continued to stage attacks in Mogadishu despite being ousted from the seaside capital in 2011, also claimed responsibility for that killing

The targeting of members of parliament marks a turning point. The parliament is emerging as a pillar of democracy in the Horn of Africa nation.

Al-Shabab militants have previously carried out attacks against United Nations staff, government officials, African Union peacekeepers and last year on an upscale mall in Nairobi, the capital of neighboring Kenya which has sent troops into Somalia to battle al-Shabab.

Somali Prime Minister Abdiweli Sheikh Ahmed condemned the Tuesday attack and expressed shock at the “horrific and deplorable killings” of the two lawmakers.

“The use of terror will not derail us from the progress made in securing Somalia, it only serves to unite and strengthen our resolve to defeat all forms of terrorism and violence,” Ahmed said in a statement.