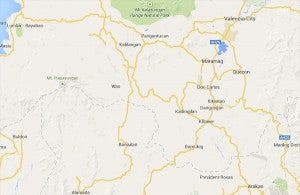 WAO, Lanao del Sur—Some 20,000 residents of this Christian-dominated town showed up at a government-organized public consultation here on Monday and expressed opposition to the inclusion of this municipality in the Bangsamoro territory.

“We were not consulted before it was submitted for review to the President,” Espinosa said.

Bacani, during the public consultation, said a copy of the draft legislation could not be made public as it was still being reviewed by Malacañang. He said, however, he was “confident that Congress will approve the Bangsamoro Basic Law before a plebiscite takes place.”

Some residents said they were apprehensive their lands would be affected if the town falls under the Bangsamoro jurisdiction.

Pedrito Eisma, a member of the Bangsamoro Transition Commission, said “Christians will not be in the disadvantage” under the Bangsamoro.

“Being your local chief executive, I am always be on your side,” Balicao said.

Some of those who attended the consultation brought with them placards expressing their opposition to the inclusion of the town in the Bangsamoro territory.

Wao town is second class town of 27 villages, six of which are Muslim communities.