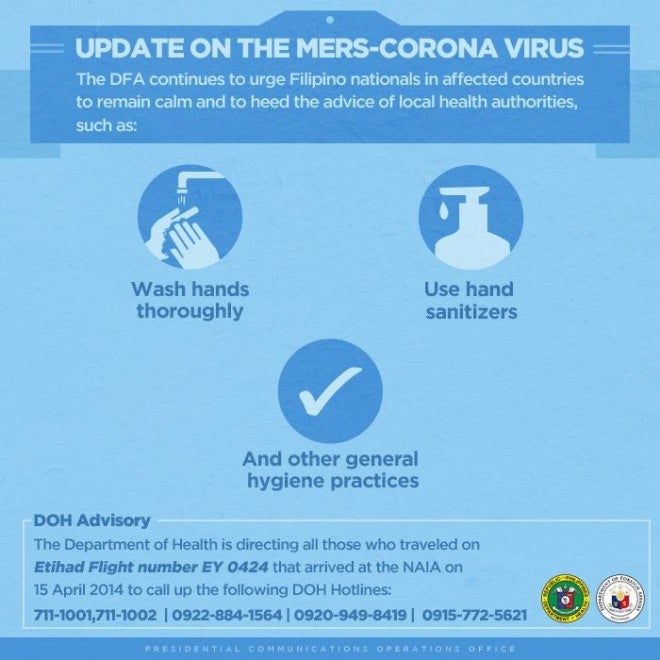 The five Negrenses were among those on Etihad Airways that arrived last week in the country where one of the passengers was initially found positive for MERS-CoV, he said.

A nurse, who came into contact with the Filipino paramedic who died of MERS-CoV in the United Arab Emirates (UAE), was on the flight.

The unnamed nurse, however, did not show symptoms of the illness. He was already on the plane back to Manila with his family when his test results in UAE came out as positive but when re-tested in the Philippines the results were negative, he added.

Tumimbang said the five Negrenses identified to be on the same flight were quarantined as a precaution until the release of their test results.

Of the five, three are from Bacolod City, one from Talisay City and one from Toboso town, according to Tumimbang.

Throat swabs were taken from the five and sent to the Research Institute of Tropical Medicine for testing, Tumimbang said.

The three from Bacolod—a male engineer, female manager, and a male seafarer — as well as a male technician from Talisay are being quarantined at the Corazon Locsin Montelibano Memorial Regional Hospital, Tumimbang said.

Of the three from Bacolod, two were found negative while the results of the third one were inconclusive and would have to be retested, Dr. Marilyn Convocar, DOH regional officer, informed Tumimbang.

He said the test results on the Talisay resident and a housemaid from Toboso confined at the Cadiz District Hospital were still being verified.

This being a priority infectious disease for investigation, the RITM has been releasing results in 24 to 48 hours from testing, Tumimbang said.