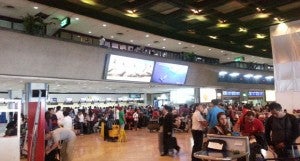 MANILA, Philippines – A lawmaker is seeking a congressional inquiry into the “mismanagement” of the Ninoy Aquino National Airport (Naia), which has been dubbed as the worst airport in the world.

In filing House Resolution 909, Valenzuela Representative Sherwin Gatchalian also wants Congress to come up with appropriate measures to erase what he described as the “appalling global image” of Naia.

“The Naia has once again been ranked as the ‘Worst Airport in the World’ by the Travel Website ‘A Guide to Sleeping in Airports’ in its 2013 online voting poll survey,” Gatchalian said in a statement on Monday.

The criteria for the airport review, he said, have been based on “comfort, convenience, cleanliness, and customer service.”

Gatchalian also noted that the Naia, a three-decade-old structure, has earned the distinction as “the world’s most notorious airport by traveller’s votes in the year 2010, and then again landed in the topmost category of the worst in the years 2011 and 2012.”

While Malacañang had previously said that these concerns were already being addressed, Gatchalian lamented that “until these days, problems of an old and congested terminal, the same complaints of bribery, lack of comfortable seats, rude staff and poor facilities hound us and continue to be a challenge for the government.”

“Negative assessments that tend to overshadow the beauty and world class tourist destinations in the country should be carefully reviewed and addressed to provide solutions,” he said.

Gatchalian said there is a need for Congress to review and be provided with an update on the P1.16-billion budget approved by the government thru the Department of Transportation and Communication on November 2011, intended to revive Airport Terminal 1 as a world-class transport facility.  Kyle Kelly

Naia 1 is a pigpen