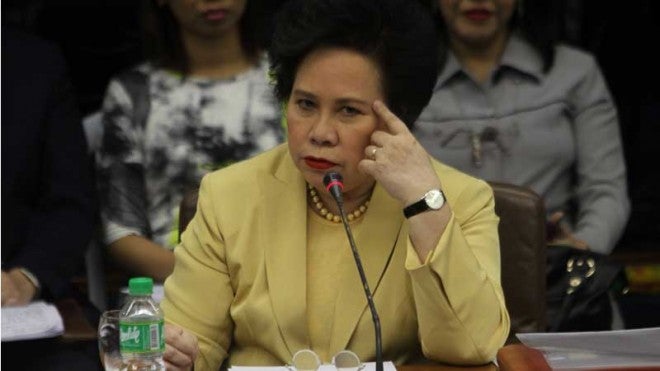 It’s not farfetched that the Aquino administration has convinced Jessica Lucila “Gigi” Reyes to testify against Sen. Juan Ponce Enrile over the alleged P10-billion pork scam in exchange for her acquittal, Sen. Miriam Defensor-Santiago said Sunday.

Santiago said it would be logical for President Aquino to order government officials to bring home eyewitnesses in the “galactic corruption” to pin down its brains.

The former trial judge said Enrile was the mastermind who convinced Senators Jinggoy Estrada and Ramon Revilla Jr. to take part in the scam.

If reports were true that Enrile was unaware of the abrupt return of Reyes, his former chief of staff, this could mean that they had “broken up,” said Santiago, who has a running feud with the former Senate president.

Santiago said she would write Sen. Teofisto Guingona III, chair of the blue ribbon committee, to call Reyes as a witness “to complete” the story.

Before Congress adjourned for the Lenten break, Guingona announced that he had prepared a draft report on the pork barrel hearings, recommending prosecution of the three senators.

“If I were President Aquino, that’s the first thing I would order: Find those who have fled the country, and convince them to come home and turn state witness on the promise that they will be cleared just so we could trace the key to corruption,” Santiago said over radio.

“If you’re asking me a hypothetical question, my answer is definitely a yes,” she added when asked over dzBB whether the administration convinced Reyes to come home and turn state witness. “That’s the first thing you should do: Find the mastermind.”

Santiago said she believed Reyes came home on the urging of administration officials.

“I don’t think she reached the decision on her own,” she said, pointing out that as things stood, Reyes was facing plunder charges before the Sandiganbayan.

Reyes, 51, flew home before dawn Saturday eight months after fleeing the country in the middle of the scam, vowing to face the charges against her.

A staff member of Enrile said yesterday he was not issuing any statement as of now.

The Inquirer broke the story on the conversion of P10 billion in lawmakers’ Priority Development Assistance Fund or pork barrel into kickbacks over 10 years beginning with the Arroyo administration.

When the scandal broke, Enrile’s lawyer Enrique de la Paz said the senator did not give his blessing to what Reyes had done in the releases of his pork barrel funds.

Reyes insisted that her boss would designate her or any of the deputy chiefs to sign endorsement documents on his behalf to the Department of Budget and Management.

Ruby Tuason, a confessed bagwoman of alleged pork barrel queen Janet Lim-Napoles, earlier testified in the Senate that she delivered millions of pesos stuffed in bags to Reyes for Enrile.

Despite her role in the scam, it was all worth it for the government to allow Reyes to turn state witness, Santiago said.