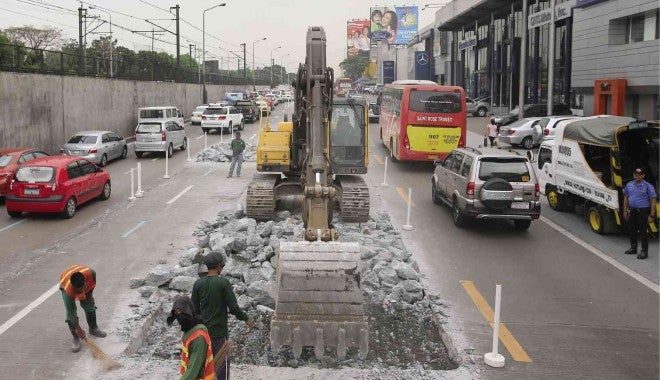 IF IT AIN’T BROKE… Starting on Holy Wednesday, sections of Edsa were closed for “reblocking,” this one near Camp Crame on the southbound lane in Quezon City. The repair works are supposed to be completed today but some private contractors have been hit by delays, according to the MMDA. EDWIN BACASMAS

The Holy Week may be over, but the public’s “agony” on Edsa is not.

The Metropolitan Manila Development Authority (MMDA) served notice to motorists and commuters that the latest reblocking or road repair activities on the 24-kilometer highway would not be completed today due to the “inefficiencies” of some of the work crews.

MMDA Chair Francis Tolentino on Sunday said the agency would demand an explanation from the private contractors tapped by the Department of Public Works and Highways (DPWH) for their failure to meet the deadline.

Days before the Lenten break, the MMDA made repeated announcements about the schedule of the reblocking projects, asking the public to avoid Edsa.

“I think the delay is due to the inefficiencies of some contractors. Kung babagal-bagal at tatamad-tamad ay ’yun talaga ang mangyayari (If they are working slowly and lazily, that’s the result),” Tolentino said on the MMDA’s weekly radio program.

The MMDA chief said he would write a letter to the district engineers of the DPWH and the contractors, noting that “their competence and efficiency are at stake here.”

“There is no excuse for the delay because the date of the completion of the work is part of the agreement,” he said. “We have given them time to do the work and still they haven’t completed them. I think the problem rests with them.”

One of the areas which would not be finished on time is the section near the gate of Dasmariñas Village in Makati City, according to Tolentino.

He said the contractor for that section started pouring fresh concrete only on Black Saturday despite being given ample time to do so starting Maundy Thursday.

Other delayed repairs were on two sections in Urdaneta Village, near the inner lane of Estrella Street also in Makati. These sections would therefore remain closed to traffic even after today’s 5 a.m. deadline, Tolentino said.

But the official assured motorists that most of the southbound lanes will be open to vehicles on Monday.

Reached for comment, Rey Tagudando, director of the DPWH-National Capital Region office, said the road projects were delayed mainly because the MMDA moved the start of the reblocking schedule by 16 hours, from Tuesday to Wednesday last week.

“We complied, but we didn’t agree that we could compress the work within the given time. We just promised the MMDA that we would give it our best effort,” Tagudando said in a phone interview.

Earlier, the MMDA decided to delay the reblocking projects on at least 94 sections of Edsa for the sake of travelers leaving the capital for the Holy Week break. Work on the southbound lane of Edsa started at 2 p.m. Wednesday instead of 10 p.m. Tuesday.

“Most of the (sections for reblocking) are already finished. But we need at least three days for the curing (or drying) period or else the newly repaired roads would easily deteriorate,” Tagudando said.

Tagudando said the DPWH had asked the MMDA to give them time for the curing period until Tuesday noon.

“MMDA officials can open the sections that are still in the curing process, but these officials should be held liable if the resulting work is found to be substandard,” he said.

“Our advice to motorists is to avoid Edsa until Tuesday,” the public works official said.