PARIS — Four French journalists kidnapped and held for 10 months in Syria returned home Sunday to joyful families, a presidential welcome and questions about how France managed to obtain their freedom from Islamic extremists.

The four — Edouard Elias, Didier Francois, Nicolas Henin and Pierre Torres — were freed by their kidnappers a day earlier at the Turkish border. They were captured in two separate incidents last June.

At an emotional welcome ceremony at Villacoublay military airport outside Paris, President Francois Hollande saluted their return as “a moment of joy” for France.

Hollande saluted Turkish authorities for helping in the journalists’ return but did not elaborate.

“It’s such a delight and a relief to be free, to see the sky … to breath the fresh air, to walk, to talk to you,” said Francois, a noted war reporter for Europe 1.

Elias, a freelance photographer, also was working for Europe 1 radio. Henin and Torres are freelance journalists.

Later, Foreign Minister Laurent Fabius reiterated “France does not pay ransom” for hostages in an interview with Europe 1 radio. He also said no weapons were delivered to the Islamic radicals holding the four.

“There was no question of contact with the Syrian government” of Bashir Assad, whom France and other Western nations blame for Syria’s civil war and want removed from power, Fabius said.

“So it was of another nature,” he said, suggesting some bargain was struck.

The journalists’ captors have not been formally identified, although the Islamic State of Iraq and the Levant, among the most radical of the Islamic groups operating in Syria, is a main suspect. A Syrian who served as translator and guide for two of the journalists said that breakaway al-Qaida group surely captured them in the eastern province of Raqqa.

Hussam al-Ahmad, 23, told The Associated Press that Henin and Torres aroused the fighters’ suspicion after they entered a school and asked to take pictures of the fighters as they played soccer. The journalists were seized four days after an initial interrogation, al-Ahmad said. 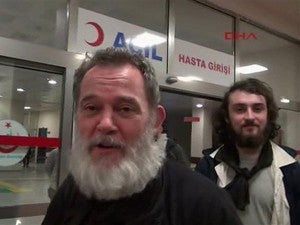 Francois said the captivity “was long but we never doubted” in an eventual liberation. He said journalists need to go to Syria — the world’s most dangerous conflict for them — because someone must describe the civil war there to the world.

“Our families suffered” for this choice, he said, his voice cracking with emotion.

Henin, his young child in his arms, said in brief remarks that he was “not always” treated well in captivity but did not elaborate. He told France 24 TV station earlier he was held in “about 10 places of captivity, prisons, mostly with other people.”

Just before being freed, Henin said the group was offered extra food but hardly given time to eat.

Fabius denied a Turkish media report that the freed hostages were left blindfolded and handcuffed at the border. He said French authorities had known for two weeks that “things were nearing.”

Syria is considered the world’s most dangerous assignment for journalists. The New York-based Committee to Protect Journalists said in April that 61 journalists were kidnapped in Syria in 2013, while more than 60 have been killed since the conflict began in 2011.

The widespread abductions of journalists is unprecedented and has been largely unreported by news organizations in the hope that may help negotiations on freeing the captives. Jihadi groups against the Syrian government are believed to be behind most recent kidnappings.