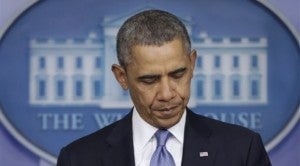 CINCINNATI  — A U.S. teacher has been fired following allegations that he told a black student who said he wanted to become president that the nation didn’t need another black president.

The Cincinnati Enquirer reports the Fairfield Board of Education voted 4-0 Thursday to fire Gil Voigt.

Voigt didn’t immediately return a call for comment Friday but has said the student misquoted him.

Voigt, who is white, says what he actually told the teen was that he doesn’t think the nation can afford another president like Barack Obama, “whether he’s black or white.”

The referee also found Voigt had made other offensive comments in class over the years, including an accusation that in 2008, he trained his laser pointer at a black student and said he looked like “an African-American Rudolph.”

In 2012, Voigt was accused of calling a student stupid and implying that he and some of his classmates were gay. In that incident, Voigt denied making any insulting comments to students and told school officials that a group of students in his class were colluding against him.

The state referee found Voigt’s explanation for those two incidents to also be not credible.

Voigt may appeal his firing to a court.

He had been on unpaid leave since December following a parent’s complaint about the Obama remark.