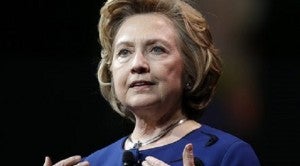 Publisher Simon & Shuster said Friday the new book will offer Clinton’s “inside account of the crises, choices and challenges” she faced as secretary of state and “how those experiences drive her view of the future.”

The book will be released June 10.

The title could also reference another big decision looming for Clinton: whether to run for president again in 2016. Polls show her as the leading Democratic contender if she seeks the White House, which was once held by her husband, Bill Clinton.

The former first lady and New York senator is already a best-selling author of the 2003 memoir, “Living History.”