South Korea school locked down by grief over sunken ferry 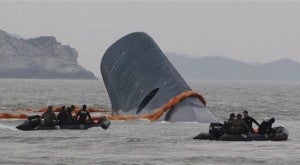 South Korean Coast Guard officers search for missing passengers aboard a sunken ferry in the waters off the southern coast near Jindo, South Korea on Thursday, April 17, 2014. AP

ANSAN–Danwon High is a school in emotional lock-down — its classrooms closed and empty, with textbooks and personal belongings scattered around and heart-wrenching messages posted on the windows.

Classes have been suspended ever since a ferry with 352 of the South Korean school’s students and 15 teachers on board capsized and sank Wednesday morning — with hundreds still listed as missing.

“I believe they are still alive and will come back,” Lee Min-Yong said after pasting up a hand-written message on a classroom window wishing her schoolmates’ safe return.

As if the tragic shadow hanging over the school in Ansan city just south of Seoul wasn’t already heavy enough, news came through Friday that its vice principal had been found dead after an apparent suicide.

Kang Min-Kyu, 52, had escaped the ferry as it sank with hundreds of his students still on board and was taken with other survivors to nearby Jindo island.

Jindo police said the cause of death was under investigation, but sources cited by local media said he was found hanging by his belt from a tree next to a gymnasium housing relatives of the missing.

Despite classes being suspended, scores of Danwon High students have continued coming to school, seeking comfort in each other’s company and watching news footage of the ongoing rescue operations on a monitor in the main assembly hall.

Classroom doors and windows have been plastered with stickers, post-its and torn-out pages from exercise books, all scrawled with personal messages.

“Bo-Hyun. Please come back. I miss you so much!” said one.

“My teacher. I love you… You have been always the best,” said another.

The ferry had left the western port of Incheon on Tuesday evening en route for the southern resort island of Jeju where the students were going to enjoy an organised school outing.

In the immediate aftermath of the sinking, some parents of those on board had lambasted the school authorities, saying they should have stopped the ferry leaving Incheon because of heavy fog in the area.

Kim Bum-Su said he had been upset by the sight of parents haranguing his teachers.

“I was confused and couldn’t sleep, but I think the teachers are innocent. We all hope that our school will overcome this tragedy and come back to normal quickly,” he said.

“I’m so worried about the fate of the missing students but I won’t cry unless I see their bodies,” he said.

While most parents of those missing had moved down to Jindo island, a small number remained in Ansan and were camping out in the school auditorium, where volunteers helped with blankets, instant noodles and coffee.

Media intrusion was not welcome and officials from the local education authority turned some uninvited visitors away at the door.

“It’s not time to discuss who is to blame because the most urgent thing now is the fate of our students still trapped in the submerged ship,” one teacher, who asked not to be identified, told AFP.

He said the school staff had been told to refrain from commenting on the situation.

Although far away from the site of the disaster, the parents, staff and students watching events unfold on the auditorium monitor were totally absorbed.

When it became clear that the only visible piece of the ferry, a small section of the keel, had slipped below the water surface, the reaction was immediate.

Several mothers burst into tears, while some female students lowered their heads or covered their face with hands, sobbing and hugging each other.

Lee Mi-Shim, the 48-year-old mother of a missing student, collapsed and was carried by volunteers into a nearby emergency room.

Lee had decided against making the journey with other parents to Jindo island because she had a heart condition.

Another mother with tears streaming down her face sat in the corridor outside the her son’s classroom, wailing: “Where are you, my baby!”