Punishment for discrimination vs race, belief, gender pushed in Senate 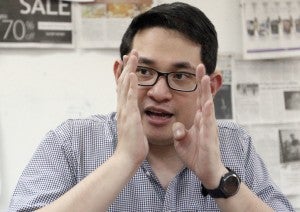 MANILA, Philippines — A bill that seeks to prohibit and penalize discrimination on the basis of ethnicity, race, religion or belief, gender, sexual orientation, civil status, HIV status and other medical condition, among others, has been filed at the Senate.

In filing Senate Bill 2122, neophyte Senator Paolo Benigno “Bam” Aquino IV noted that while the Philippines was a signatory to numerous international agreements that seek to ensure respect for the human rights of all persons, some sectors continue to experience discrimination in schools, workplaces, public service, as well as commercial establishments.

“Unfortunately, reality has yet to catch up with the noble intetnions of these numerous laws and international agreements,” Aquino said in his explanatory note of the bill.

“In schools, workplaces, commercial establishments, public service, police and military, prejudicial practices and policies based on sexual orientation, gender and cultural identity limit the exercise and enjoyment of basic human rights and fundamental freedoms, as well as impede or delay the delivery of basic services,” he said.

He cited, for instance, the employment practices that prioritize single over married job applicants “despite the fact that there is no empirical link between a person’s civil status and his or her job performance.”

He also noted the continues oppression against the lesbian, gay, bisexual and transsexual (LGBT) community continues “primarily because of misconceptions and ignorance.”

“LGBT students, for instance, are refused admission or expelled from schools due to their sexual orientation or gender identity,” said the senator.

“Companies block the promotion of LGBT employees due to the deeply embedded notion that homosexuality is an indication of weakness,” he said.

Aquino said laws, such as the anti-vagrancy law, were also being abused by law enforcement agencies to harass gay men.

His proposed measure then seeks to prohibit and prohibit discrimination that is “indirectly or directly based on the actual or perceived ethnicity, race, religion or belief, political inclination, social class, gender, sexual orientation, gender identity, gender expression, civil status, HIV status and other medical condition.”

Under “denial of right to work,” the bill declares it unlawful for any person to deny employment in government institutions, including police and military service, based on the bill’s definition of discrimination.

The Commission on Human Rights, under the bill, should investigate and recommend the filing of a complaint against any person/s who would violate the proposed law.

Any person who would be found guilty of discriminatory practices as defined by the bill could face up to 12 years imprisonment or/and a fine of up to P250,000.