‘Mom, I love you,’ says text from student on sinking ferry 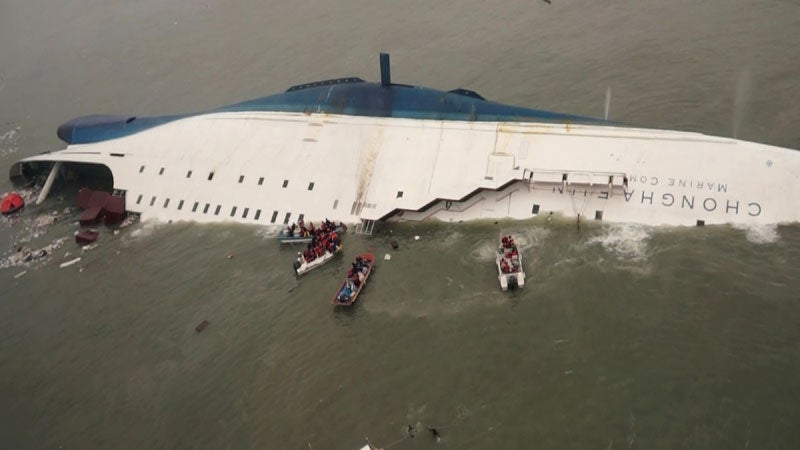 SEOUL – Heart-wrenching messages of fear, love and despair, sent by high school students from a sinking South Korean ferry added extra emotional weight Thursday to a tragedy that has stunned the entire nation.

Nearly 300 people — most of them students on a high school to a holiday island — are still missing after the ferry capsized and sank on Wednesday morning.

“Sending this in case I may not be able to say this again. Mom, I love you,” one student Shin Young-Jin said in a text to his mother that was widely circulated in the South Korean media.

“Oh, I love you too son,” texted back his mother who was unaware at the time that her son was caught in a life and death struggle to escape the rapidly sinking vessel.

Unlike many others, the exchange had a happy ending as Shin was one of only 179 survivors rescued before the ferry capsized and went under the water.

Others were not so fortunate.

Another student, 16-year-old Kim Woong-Ki sent a desperate text for help to his elder brother as the ship listed violently over to one side.

“My room is tilting about 45 degrees. My mobile is not working very well,” Kim messaged.

Seeking to reassure him, his brother said he was sure help was on the way.

“So don’t panic and just do whatever you’re told to do. Then you’ll be fine,” he messaged back.

There was no further communication and Kim was listed among the 287 people on board still unaccounted for.

Sadly his brother’s advice was similar to that of the crew who controversially ordered passengers to stay put when the ship first foundered.

Angry relatives said this resulted in the passengers getting trapped when the ferry keeled over, cutting off routes of escape.

That grim scenario was encapsulated in the texts of an 18-year-old student, identified in the local media by her surname Shin.

“Dad, don’t worry. I’m wearing a life vest and am with other girls. We’re inside the ship, still in the hallway,” the girl messaged to her father.

Her distraught father texted her to try and get out, but it was already too late.

“Dad, I can’t. The ship is too tilted. The hallway is crowded with so many people,” she responded in a final message.

Some parents managed a last, traumatic phone call with their children as they tried to escape.

“She told me the ship was tilted over and she couldn’t see anything,” one mother recalled of a panicked conversation with her student daughter.

“She said ‘I haven’t put on the life jacket yet’, and then the phone went dead,” the mother told the Dong-A Ilbo newspaper.