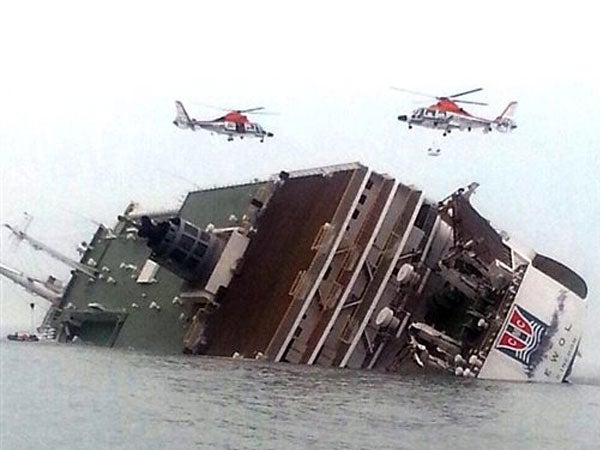 Rescue helicopters fly over a sinking South Korean passenger ferry that was carrying more than 450 passengers, mostly high school students, Wednesday, April 16, 2014, off South Korea’s southern coast. Hundreds of people are missing despite a frantic, hours-long rescue by dozens of ships and helicopters. At least four people were confirmed dead and 55 injured. AP

JINDO—The frantic search for nearly 300 people, most of them schoolchildren, missing after a South Korean ferry capsized slipped into a second day Thursday, as distraught relatives maintained an agonised vigil on shore.

Six people were confirmed dead, but with every hour that passed fears mounted for the 290 still unaccounted for after the multi-storey vessel with 475 on board suddenly listed, capsized and then sank 20 kilometres (13 miles) offshore.

Naval and coastguard vessels used floodlights and flares to keep the search operation going through the night, but strong currents and low visibility hampered efforts by diving teams to access the submerged vessel in the hope of finding survivors trapped in air pockets.

“They were unable to enter any of the cabins,” said one senior coastguard official.

The coastguard said 179 people had been rescued, a figure little changed from the previous evening.

It was still unclear what caused the 6,825-tonne Sewol to sink, although numerous passengers spoke of a loud thud and the vessel coming to an abrupt, shuddering halt — suggesting it had run aground or hit a submerged object.

Distressing mobile phone footage taken by one survivor emerged Thursday, showing the panic on board with one woman desperately screaming “The water’s coming, the water’s coming.”

The captain was among those rescued and was being questioned by coastguard officials.

The passengers included 375 high school students travelling with their teachers to the popular island resort of Jeju.

On nearby Jindo island where anxious relatives wrapped in blankets sat throughout the night waiting for news, there was a mood of angry desperation.

“My daughter is out there, somewhere out there in the cold sea. Please help,” said mother Park Yu-Shin.

Some were outraged by survivor testimony that passengers had been told not to move in the crucial period after the ferry stopped and before it listed sharply to the side.

“We must have waited 30 to 40 minutes after the crew told us to stay put,” said one rescued student.

“Then everything tilted over and everyone started screaming and scrambling to get out,” he said.

When South Korean Prime Minister Chung Hong-Won visited the gymnasium in Jindo where the relatives were waiting, some irate parents shouted and jeered at him.

A special boat packed with relatives of the missing left Jindo early Thursday for the site of the capsized ferry.

Rescuers said they feared hundreds had been unable to escape the vessel before it became completely inverted and sank with only a small section of keel sticking above the surface.

One senior rescue team official, Cho Yang-Bok, said there was “little chance” of anyone trapped inside surviving for long.

Among the six confirmed dead were three students, one teacher and one crew member. One was unidentified.

The initial distress signal from the Sewol came at 9:00am Wednesday, and many of the survivors were picked up by small commercial vessels that got to the scene ahead of the navy and coastguard.

Television footage showed terrified passengers wearing life jackets clambering into inflatable boats that pushed right up to the rails of the listing vessel as it sank.

President Park Geun-Hye voiced shock and pain at “tragic accident”, especially with so many children on board.

“Please do not give up until the very last moment,” she said during a visit to the national disaster agency’s situation room in Seoul.

The US 7th Fleet sent an amphibious assault ship on patrol in the area to help, while White House spokesman Jay Carney said Washington was ready to provide its ally with “any assistance” needed.

Three giant floating cranes had been despatched to the site to begin operations to raise the submerged vessel.

Scores of ferries ply the waters between the South Korean mainland and its multiple offshore islands every day, and accidents are relatively rare.

In one of the worst incidents, nearly 300 people died when a ferry capsized off the west coast in October 1993.