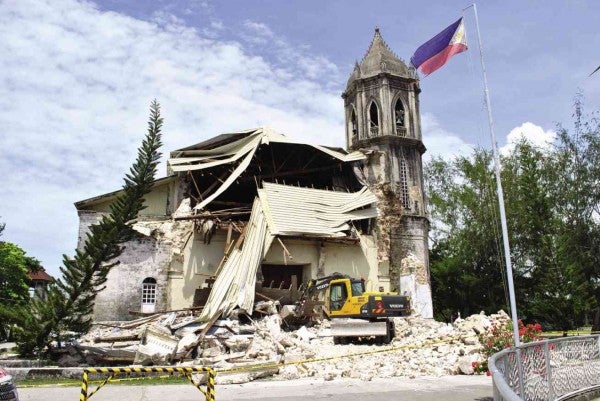 CRANE sifts through the rubble of the damaged Our Lady of Assumption Parish Church in Dauis in Bohol. AP FILE PHOTO

BOHOL, Philippines—The 7.2-magnitude earthquake destroyed centuries-old churches in Bohol province but not the spirit of its people.

Makeshift churches have been put up in front of the rubble of ruined churches to welcome pilgrims who are doing their traditional Visita Iglesia (church visits).

Msgr. Jeffrey Malanog, Diocese of Tagbilaran vicar general, said the absence of church structures did not mean that the people could not visit seven churches during the Holy Week.

“Churches are not only buildings. Churches are people sharing the same faith and expressing it in the manner handed to them by their forefathers,” he said.

Six churches were reduced to rubble during the Oct. 15 earthquake last year that brought this island-province to its knees. The churches are in the towns of Loboc, Clarin, Inabanga, Loon, Maribojoc and Tubigon.

Most of these churches are among the oldest in the country and had been declared heritage sites by United Nations Educational, Scientific and Cultural Organization (Unesco).

In Maribojoc town, one of the worst-hit municipalities, a temporary church was built from the P500,000 raised by the parishioners after Holy Cross Parish, also known as the San Vicente Ferrer Parish Shrine, was reduced to rubble.

The church in Maribojoc was declared by the National Museum a national cultural treasure in 2010. The National Historical Commission of the Philippines (NHCP) designated it a national historical landmark in 2009.

Beside the rubble stands a structure that doesn’t have walls except the portion where the altar is. On the altar’s wall hangs the photo of the old altar printed on tarpaulin. The metal roof is held up by four steel bars.

To remind people what their church looked like before the earthquake, tarpaulins showing the picture of the old church hang on the bulletin board and on the wall behind the altar.

He said the real essence of Visita Iglesia would remain even if the old church is gone.

“The reason why we hold Visita Iglesia is to pray to Jesus at the altar of the repose or ’monumento,’ or to visit his wake in the Santo Entiero on Good Friday,” he said.

Abarquez noticed that his parishioners’ faith had been “strengthened” after the earthquake.

“Some couples, who have been living in, have decided to get married. Some parishioners have gone back to confession,” he said.

In Loon, another badly hit municipality, a modest structure with wood as columns and GI sheets as roof serves as a temporary church for the parishioners. The earthquake destroyed the Our Lady of Light Parish.

In Loboc town, seven tents have been installed on the left side of what used to be St. Peter the Apostle parish, which crumbled during the earthquake.

Church officials are building a concrete structure to serve as an alternative church while waiting for the restoration of the old one.

In Baclayon, parish officials decided to close the church although only the facade was destroyed and its belfry damaged. This was done for safety reasons since the church’s structural integrity had yet to be checked.

The Baclayon church, built in 1727, is the oldest coral stone church in Central Visayas.

Masses have been held in four tents that have been set up on the grounds of Baclayon Central School beside the Our Lady of Immaculate Conception Church.

But a portion of the church near the altar that leads to the museum has been opened to tourists and guests.

A structure made of wooden columns and GI sheets serves as an alternative church in Tubigon town after San Isidro Labrador Parish was destroyed.

In Dauis town, Masses have been held in three tents that were put up in the open space near the convent. The earthquake damaged the Our Lady of Assumption Parish.

The relics and statues of saints that were recovered from the church were placed inside the convent for safekeeping.

Fr. Geraldo Saco Jr., parish priest of Our Lady of Assumption Parish, said the church had undergone partial restoration in time for its reopening on Easter Sunday.

But they were advised by the NHCP not to proceed with the opening because a detailed engineering study had yet to be conducted to ensure its safety, he said.

The NHCP will conduct the church’s full restoration in August, he said.

Monsignor Malanog said he expected Boholanos to celebrate the Holy Week with “more meaning” because of the calamities that struck the province.

“They knew that God never abandoned us. God is always with us,” he said. “With this, people are inspired to visit the seven churches for the Visita Iglesia.”

But for those who don’t have vehicles, the favored sites are the small churches in Tagbilaran, including the San Antonio de Padua, Taloto Church, St. Ignatius Church on Dampas, St. Jude Thaddeus Church, Our Lady of Lourdes, Cogon Shrine and the Dao church.

“Their faith is strengthened by the calamities that struck Bohol. People are going to the church. The churches are always full every Sunday and other days,” Malanog told the Inquirer in an interview.

In St. Joseph Cathedral in Tagbilaran, for instance, the weekly Mass collection before the earthquake usually reached P280,000, said Malanog.

“Increase in attendance is a sign that their faith is very much alive,” the monsignor said.