Sign maker to be nailed to cross for 28th time 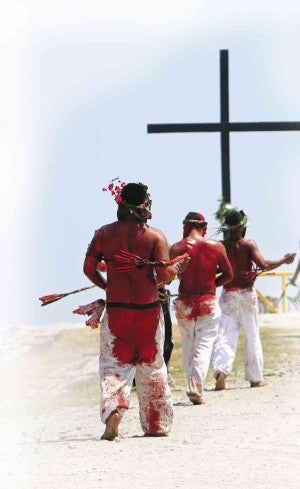 CITY OF SAN FERNANDO, Philippines—A signboard maker here will have himself nailed to a cross for the 28th time on Good Friday, possibly the longest time any Filipino has performed the ritual.

By stretching his panata (vow) for another year, Ruben Enaje helps sustain the practice of crucifixion in Barangay San Pedro Cutud that itinerant faith healer Artemio Anoza began 54 years ago.

In playing the role of Jesus Christ, the 53-year-old Enaje also helps carry out the tradition of staging the Via Crucis (Way of the Cross), a street play mounted by poet-playwright Ricardo Navarro in 1954.

“Ala pang manalili kanaku (Nobody is replacing me yet),” Enaje said.

Originally, he pledged to carry out the ritual for nine years starting in 1986 as a thanksgiving, after he survived a fall from the third floor of a building in Tarlac City where he was painting a billboard.

He offered to do it for nine more years for the cure of his daughter, Ejay, who was suffering from asthma. The third nine-year vow was for his wife, Juanita, who grew a lump in her jaw.

Enaje has not grown tired of being crucified and has not doubted the power of this form of sacrifice.

“It is my expression of faith,” he said. “God has been merciful to us. My daughter and wife have been cured of their ailments. I am healthy and I am able to work … My family has not missed meals. God has been kind to us.”

“I will again thank God, seek more blessings, especially for my family’s good health. I hope God will strengthen my faith in Him.”

Zoilo Castro Jr., Cutud barangay captain, says the village council is looking for an acceptable substitute for Enaje as the lead Christ.

Standards of decent behavior—not a drunkard, a womanizer or illegal drugs user—are imposed on those who will try to replace Enaje to “give the youth a good example to follow,” Castro said.

Only one man had sought to replace Enaje but the council found him unworthy because of his reputation as a drug addict. That man, though, has not been banned from the crucifixion rite.

In the village where many poor people live, Enaje is described as quiet, family-oriented and helpful to his neighbors in need.

Aside from Enaje, eight other men have registered to be crucified in San Pedro Cutud, said Councilor Harvey Quiwa, chair of the city tourism council.

Three men are scheduled to be crucified in Barangay Sta. Lucia and four others in Barangay San Juan, both in San Fernando.

In the 1990s, a female faith healer from Bulacan province and a British woman broke this all-male tradition.

A Briton backed out at the last minute in 2008 when he saw Enaje and the other penitents cry or scream in pain.

Like Enaje, people performing the crucifixion, as well as the mandarame (flagellants), all converge in Purok Kuatro where devotees have carved a hill out of Mt. Pinatubo’s lahar, transforming this into a local Calvary during the Holy Week.

In the same village, makers of suman (glutinous rice wrapped in coconut fronds) have a heyday selling the native snack.

Although Enaje has taken to the cross 27 times, his wife said she is always nervous for his safety. Almost yearly, when she has enough savings, Juanita sponsors the “pabasa,” a singing of the passion of Christ.

For her husband’s ritual, Juanita soaks in alcohol all year round the four stainless steel nails he uses in his sacrifice.

At noon on Good Friday, Enaje leads the Via Crucis, starting the scene by having “Roman soldiers” arrest him.

Then he walks on a sandy road reddened by the blood of flagellants who have wounded their backs with glass shards or blades and beaten them with “burilyos” (24 bamboo sticks attached to a rope).

At the “Calvary,” Enaje is raised to the cross in the middle of the hill, his arms, wrists and feet tied by pieces of cloth.

In the 10 minutes that he is hoisted on the cross, with thousands watching the spectacle of faith, he recites the Lord’s Prayer and prays for the well-being of his family, friends and government leaders.

Then, the cross is brought down.

A man acting the part of a centurion then hammers nails into Enaje’s palms and feet. The cross is raised again for five minutes.

Enaje said the same spots on his hands and feet are nailed. “It is always painful and bloody,” he said

The pain is greater when the nails are pulled out and medics clean the wounds, which get healed in a month or two.

Despite a ban by village leaders, even 10-year-old boys start as flagellants.

Archbishop Socrates Villegas, head of the Catholic Bishops’ Conference of the Philippines, has issued a reminder to those planning to get nailed to crosses on Good Friday—be on guard against spiritual vanity.

Villegas said the act only becomes pleasing to God if it is done to increase one’s capability to love their neighbors.

“If you do it just so people can take a photo of you so that you can become popular, then even that becomes spiritual vanity,” Villegas told reporters.

Archbishop Paciano Aniceto, head of the Archdiocese of San Fernando, has been discouraging the bloody, painful rites.

“It is enough that we reconcile with God through confession, prayers, community service and doing acts of charity,” he said. With a report from Jocelyn R. Uy