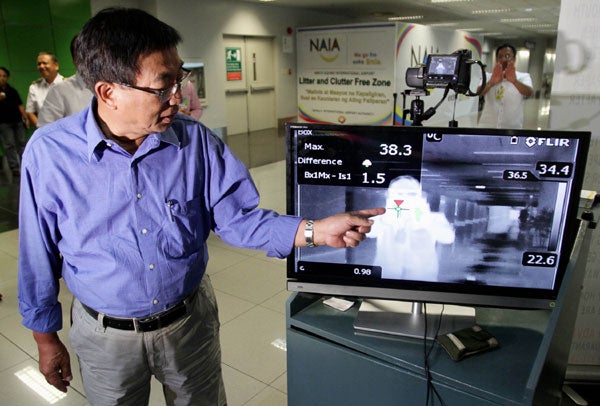 MANILA, Philippines – After a Filipino casualty in the United Arab Emirates, an overseas Filipino worker who recently arrived in Manila was tested positive for the Middle East Respiratory Syndrome-Corona Virus (MERS-CoV).

Health Secretary Enrique Ona said Wednesday the OFW, who is a nurse, had contact with the victim who died in UAE.

The male health worker is now on quarantine.

In a television interview, Ona said that four members of the OFW’s family who fetched him at the Ninoy Aquino International Aquino were also quarantined.

He clarified that so far the four have not yet experienced the symptoms of the virus, which include fever, cough, shortness of breath, and diarrhea.

Ona said the OFW underwent a test for MERS-CoV in UAE but immediately left for Manila.  He added doctors in the UAE later confirmed the OFW was positive for the virus and informed the DOH.

However, Ona said that the OFW appeared normal.

“He has no symptoms.  He has the virus but he is not sick with it.  But he still can infect others so we put him in isolation.  We can say that he’s a carrier.  It means he was exposed to the virus,” Ona said.

“There’s a possibility that he can get sick or can infect others in two weeks, that’s why he is on isolation,” Ona added. He said the OFW will be tested every five days to see if he still has the virus.

If the OFW develops MERS-CoV symptoms such as fever, cough or muscle pain, only then will he be given the appropriate medication, Ona said, adding, however,  that a vaccine has yet to be developed for the disease, he said.

Ona said the DOH was also tracing seatmates on the plane and other people who interacted with the OFW, including airport personnel, so that they can be evaluated, observed and quarantined if necessary.

“We just want to make sure that these people had no MERS-CoV and had no symptoms. These are all precautionary measures,” he said.

Ona said the government will shoulder the expenses of those who get sick with MERS-CoV or get quarantined.

On Twitter, Health Undersecretary Eric Tayag said that with the OFW’s case, the Philippines has become the 12th country and the first in Asia outside the Middle East with laboratory-confirmed MERS-CoV.

But there were reports that a Malaysian was the first person in Asia to succumb to the virus.