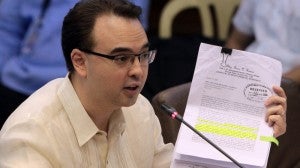 (I don’t think it’s right to demonize Manny, who has done nothing but bring honor to our country and the entire Filipinos throughout the world.)

“I understand the BIR’s role and mission. Although tax collection is unpopular, it is necessary. But don’t destroy the very few things that make Filipinos unite and make us forget the calamities, problems and harshness of life, even if just for a few hours or a day,” he said.

“Don’t be overacting, or Kulang sa Pansin,” said the senator.

Cayetano then trained his guns at Malacañang for quickly defending its appointees.

“A reprimand is in order. Being interviewed or asked by the media is not an excuse. The commissioner could have said ‘no comment,’ and reminded Manny privately of his obligations,” he said.

He was referring to Communications Secretary Herminio Coloma’s statement that Henares was just answering the media’s questions when she publicly discussed about Pacquiao’s tax liabilities shortly after his victory.

“Collect taxes. Do your job. But do it with respect and with dignity. That is the Filipino way. Even in collecting taxes,” Cayetano added.

Why is the lifestyle set now afraid to wear jewelry–before Kim Henares?