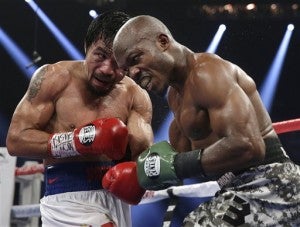 The overwhelming consensus among boxing fans is the undefeated Floyd Mayweather Jr. in a highly anticipated bout expected to become the richest in boxing history.

But first the Pacman will have to deal with the local taxman, Commissioner Kim Henares of the Bureau of Internal Revenue (BIR).

Henares was on radio on Monday reminding the boxing superstar of his tax liabilities, which were estimated at P2.1 billion as of December 2012 alone. In a radio interview,  she said the assessment did not yet include interest.

But a Malacañang spokesperson said on Monday that Henares was not out to play “spoiler to [Pacquiao’s] victory.”

“We don’t quite think that Commissioner Henares intends to be in any way disrespectful, or that her manner any way tends to lessen the honor that Manny Pacquiao has brought to the country,” Deputy Presidential Spokesperson Abigail Valte said in a press conference.

“We don’t mean to make it hard for Congressman Pacquiao.”

One reporter told Valte about negative reactions online to the BIR’s pursuit of Pacquiao. She said Henares was just “very focused on her job and on her mandate.”

“I don’t quite think that she intends to be offensive. She’s just doing her job,” she said, recalling that Pacquiao’s camp had been “working” with the BIR on how to settle his tax liabilities.

But Malacañang was quick to clarify that the affair didn’t mean that the BIR was letting Pacquiao off the hook.

“The BIR case on Representative Pacquiao’s tax accountability continues to be pursued and he is still required to fulfill all his legal obligations to the government,” Communications Secretary Herminio Coloma said then.

Aside from his local tax deficiencies, Pacquiao is also facing a similar problem with the United States’ Internal Revenue Service, which was reportedly seeking $18 million in back taxes.

Last year, the IRS issued a levy on Pacquiao’s bank accounts in the US to recover the alleged tax liabilities covering 2006 to 2010. The boxer had also been issued a “notice of federal tax lien” amounting to $18,313,669.

Last December, Pacquiao’s Philippine lawyer Tranquil Salvador said the “IRS liens on his properties and bank accounts” had been “vacated,” meaning the boxer “has satisfied the requirements of the US law.”

A USA Today report last April 11 raised the possibility that part of Pacquiao’s $20-million guaranteed purse for the Bradley fight might go to the IRS.

Michael Koncz, Pacquiao’s adviser, was quoted as saying that “in America, there’s no issue of tax evasion or nothing.

“The major issues here are about four categories of tax deductions. We have a tremendous accounting team working for us. We have great tax lawyers working for us,” he told USA Today.

Read Next
PUVs reminded to show only ‘general patronage,’ ‘parental guidance’ movies
EDITORS' PICK
Metro Manila’s COVID-19 cases on downward trend, but surge not over — OCTA
House energy committee chair Arroyo bats for cheap electricity
Unleash the photographer in you this World Photography Day with vivo smartphones
Look Through: The fate of impounded stray dogs
Palace warns sugar hoarders after raid on Pampanga warehouse
What to watch out for when selecting a video surveillance solution
MOST READ
LOOK: Miel Pangilinan dazzles in glittery pre-debut shoot
DOJ indicts bank officer in $2.1 billion Wirecard fiasco
No De Lima visit, but US lawmakers got to see Marcos
August 19 a special non-working holiday in Quezon City
Don't miss out on the latest news and information.