Cedric Lee, others accused in Vhong mauling face arrest if they leave PH 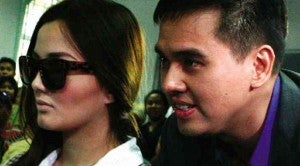 MANILA, Philippines—Justice Secretary Leila De Lima on Monday warned that all accused in the mauling of comedian/TV host Vhong Navarro will be arrested if they insist on leaving the country without certification from the court or the National Prosecution Service (NPS).

The Justice Secretary issued the statement after Ferdinand Guerrero, one of the accused attempted to leave the country early Monday morning.

“Our position is that any such attempt to leave will be construed as an attempt to obstruct, frustrate or hinder administration of justice. It tends to frustrate the successful prosecution of the case. This is an obstruction of justice, this is a criminal offense and if you are attempting to leave, you are inflagrate delicto (caught in the act) and therefore you can be arrested and subject to inquest proceedings,” De Lima told reporters.

Guerrero was intercepted by Immigration authorities at the Ninoy Aquino International Airport when he was seen in line at the immigration counter around 4:30 a.m.

“Guerrero was referred to secondary inspection and was not cleared for departure upon coordination with concerned government agencies,” said lawyer Elaine Tan, technical assistant at the office of BI Commissioner Siegfred Mison.

Tan said Guerrero was supposed to board the Cebu Pacific flight 5J 108, which was scheduled to fly to Hong Kong at 4:43 a.m.

De Lima said the prosecutors also asked the Taguig court to issue a hold departure order against all the accused.

On Saturday, Cedric Lee, also booked a Cebu Pacific flight bound for Dubai, but the booking was later on cancelled.

Read Next
Maynilad to deploy water tanks in villages affected by water interruption
EDITORS' PICK
EDITORIAL: To a bike-friendly future
The Best Tech Gifts For The 2022 Holidays
Is it safe to talk politics again at family gatherings? ‘The Reconciliation Dinner’ shows us what that’s like
House energy committee chair Arroyo bats for cheap electricity
vivo’s coming to town to grant wishes with more holiday promos
Pagasa: Warm, sunny Sunday in most parts of PH
MOST READ
LOOK: Vhong Navarro transferred to BJMP detention facility in Taguig
The Elephant Man in the Senate
Posh village as ‘shabu’ haven
LOOK: Zanjoe Marudo bonds with Ria Atayde, her family
Don't miss out on the latest news and information.