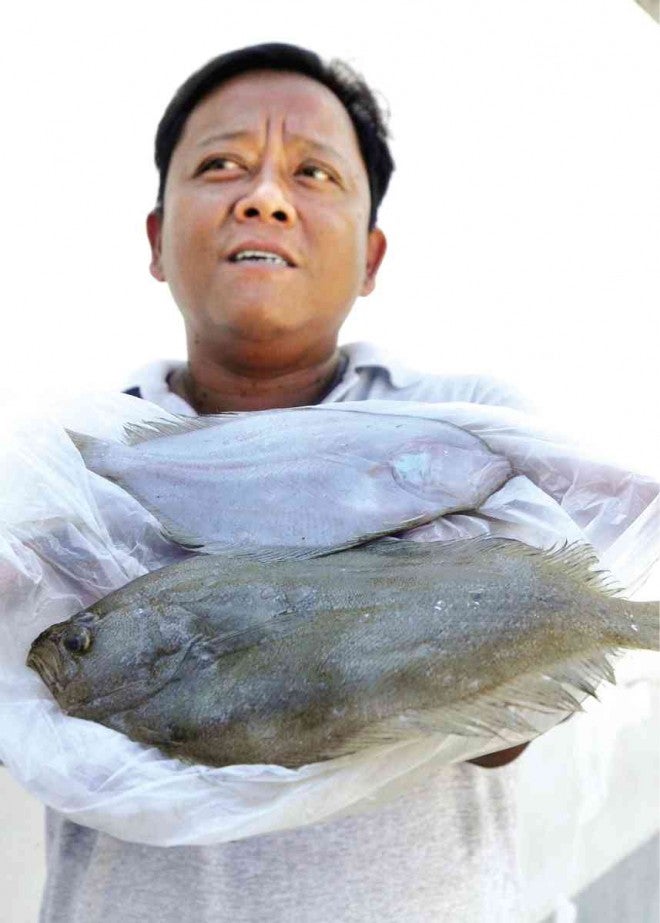 A fisherman holds up the “kera kera’y Diyos.” WILLIE LOMIBAO/CONTRIBUTOR

DAGUPAN CITY, Philippines— Ask anyone at the fish market here where to find “kera kera’y Diyos (God’s leftover)” and you will likely be directed to an ambulant vendor offering it.

Kera kera’y Diyos is a flatfish, also known as “dalupani” and “isdang dapa” in Filipino. Unlike other fish species, it is asymmetrical, and its eyes are located on one side of the fish’s flattened head.

Westly Rosario, chief of the National Integrated Fisheries Technology Development Center here, said local fishermen gave the fish this unusual name because it was supposed to be half of the fish that Jesus had eaten after the Resurrection.

“According to the story, Jesus consumed only half of the fish he was given to eat. The people considered it holy and decided to throw it back into the sea and it came back to life, even if half of its body was already consumed. It came to be known later as dalupani or kera kera’y Diyos in Pangasinan,” Rosario said.

But in a review of the short film “Ichthus” published in The  Harvard Ichthus, a journal at Harvard University, it was Jesus himself who returned half of the fish to the sea.

According to the article, the short film by Ton Sison, a professor of theology and film at Catholic Theological Union in Chicago, tells about a version of a story from the Gospel of John.

According to this story, fishermen gathered around Jesus one day. Soon enough, they were famished. “Who has food to share?” Jesus asked.

A small boy had a small fish. Immediately, he offered it to Jesus. Jesus took the fish and thanked Heaven. He then divided the fish into two equal parts. One of the halves, he multiplied into seven full baskets. Soon, everyone had more than enough.

The other half he blessed, “I offer this back to the sea in memory of a boy and his miracle of sharing. May it multiply so that the next generation will have a meal to share.”

Multiply, the fish did, apparently. All its offspring took the form of a half-fish, according to the tale. In due course, the poor had kera kera’y Diyos to catch. It has become their God-given portion of the Messiah’s meal.

Despite the different stories about the fish, Pangasinan fishermen believe that the fish is indeed God’s leftover.

The fish is called “dali-dali” in Cebuano, “padaoan” or “palad” in Hiligaynon, “talangkaw” in Ilocano and “palad” in Bikol.

“It’s delicious. It just has a backbone and it’s fleshy and very easy to eat,” Rosario said.