Specialized Coast Guard base to rise in Capiz 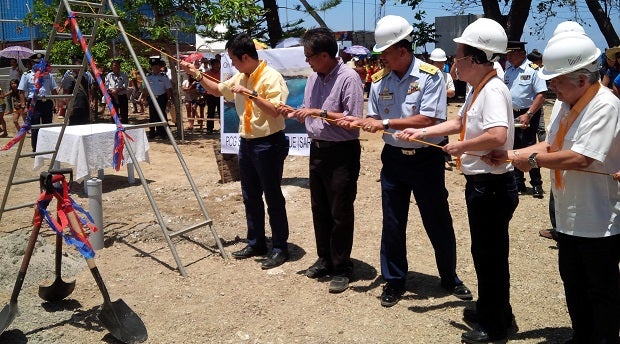 ROXAS CITY–A first of its kind, a specialized Philippine Coast Guard (PCG) base for responding to maritime disasters in Visayas will soon rise in a Capiz municipality.

The PCG Search and Rescue Base (SRB) complete with rescue and multi-role vessels from Japan and France, helicopters and a medical facility will be located at the Culasi port.

The ground of new Coast Guard base was broken Saturday led by Department of Transportation and Communication Secretary Emilio Abaya and Interior Secretary Manuel Roxas II along with PCG officials.

Speaking to reporters in Capiz, Abaya said it is a first for the Coast Guard to establish a base that particularly targets to provide immediate response during disasters off the Visayas coast.

But Abaya said the base would not be limited in performing search and rescue functions only.

He said equipment in the SRB are all multipurpose, also noting that the PCG officers are trained to be flexible in “whatever vessel they bring.”

Asked why the SRB for Visayas was built in Capiz, Abaya said: “In Aklan, you’ll  be too much west. If you want to be centrally located in the shipping lanes so your response time would be shorter, (then you would go for Culasi).”

Commander Armand Balilo, Coast Guard spokesperson, told INQUIRER.net over the phone that the base will be fully operational about 10 to 12 months after its groundbreaking.

Aside from the vessels and helicopters, Balilo said the facility will also house a hospital and barracks for deployed Coast Guard personnel.

He said the length of vessels from Japan and France range from 35 to 40 meters. These are expected to arrive the country before 2016.

Also within this year, the PCG targets to launch another Search and Rescue base in Laguindingan municipality in Misamis Oriental.