Philippines aims for US defense deal before Obama visit 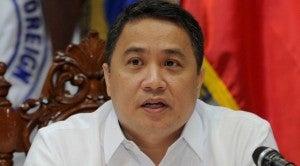 MANILA – The Philippines said Friday it hopes to complete a new defense accord with the United States ahead of a visit by President Barack Obama this month, as a territorial dispute with China simmers.

The chief Philippine negotiator, defense undersecretary Pio Lorenzo Batino, said in a statement the latest round of discussions about an increased US military presence in the country was “very productive.”

“This round brought us much closer to finding full consensus and the draft provisions on key points of an enhanced defense cooperation will be submitted to the president for his review,” Batino said.

Philippine negotiators on Friday said the eighth round of talks on a proposed military agreement had seen both sides “finding consensus on key points of a draft”.

The agreement proposes allowing more US troops, aircraft, and ships to pass through the Philippines, as well as storing equipment in this country that could help mobilize American forces faster – particularly in the case of natural disasters.

The accord would provide “critical and timely support to the modernisation of the Armed Forces of the Philippines (and the) achievement of the country’s minimum credible defense posture,” Batino’s statement said.

The deal would not allow the US military to “establish a permanent military presence or base” or bring nuclear weapons into the country, in line with the Philippine Constitution.

The proposed agreement could be signed before President Obama visits the Philippines this month, a foreign department spokesman said.

Washington has said Obama will visit the Philippines at the end of April as part of a four-nation tour of East Asia.

The United States had two large military bases near Manila until 1992, when it gave both up amid growing anti-US sentiment and a rental dispute.

However the Philippines has been seeking greater US support in recent years after China began asserting its claim to disputed territory in the South China Sea.

China claims almost all of the strategically important body of water, even up to the coasts of its neighbours.

The Philippines has responded by filing a case with a United Nations tribunal to challenge China’s territorial claim.

China has refused to participate in the case and has warned that the Philippines’ action has “seriously damaged” bilateral ties.

PH, US agree on bases use

PH, US rush defense talks for Obama visit this month

Read Next
Two trucks collide in SLEx southbound
EDITORS' PICK
PH back to low-risk status for COVID-19
Work-From-Home is here to stay and requires reliable logistics
EDITORIAL: Power play
Legarda emphasizes role of ICC/IPs in nation building this IP month
USAID Opportunity 2.0 calls for applicants for grants for out-of-school youth engagement
P120.22 billion COVID-19 funds still unspent as of end-September
MOST READ
Isko to critics after remarks vs Robredo: I’m sorry, this isn’t about Mr. Congeniality
PBB housemate Brenda Mage called out for sexual joke to Eian Rances
Martires asks why he is being singled out over issues on releasing SALNs
Why the Marcos brand remains popular
Don't miss out on the latest news and information.