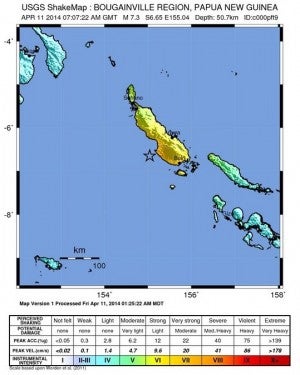 SYDNEY – A powerful 7.1-magnitude earthquake struck off Papua New Guinea on Friday and was followed by a 6.7-magnitude tremor, US officials said, but no Pacific-wide tsunami warning was sounded.

The US Geological Survey (USGS) said the first quake, originally put at 7.3 magnitude but later revised down, struck 57 kilometers (35 miles) off the town of Panguna on the remote and volcanic Bougainville island.

The second hit about an hour later 96 kilometers from Panguna, the USGS said, adding that both quakes had an estimated depth of about 50 kilometers.

Geoscience Australia estimated the first quake at 7.4 magnitude and said the tremor, which hit close to the neighbouring Solomon Islands, was believed to be in the “shallow” range.

“They would have gotten a strong shake across the island, and there’s the possibility of some damage,” David Jepsen from Geoscience Australia told AFP.

The Hawaii-based Pacific Tsunami Warning Center ruled out the threat of a Pacific-wide destructive tsunami after both quakes but Jepsen cautioned that there was a “possibility of a local tsunami” in PNG.

Chris McKee from the PNG Geophysical Observatory said officials had not yet been able to make contact with those on remote and isolated Bougainville island.

“We haven’t been able to determine whether a tsunami was generated,” he told AFP.

Quakes of such magnitude are common in the island nation, which sits on the so-called Pacific “Ring of Fire,” a hotspot for seismic activity due to friction between tectonic plates.

In October, a 7.1-magnitude quake struck in the same area – around 65 kilometers west of Panguna.

Last year in February the remote town of Lata in the Solomons was hit by a devastating tsunami after an 8.0-magnitude earthquake. The tsunami left at least 10 people dead, destroyed hundreds of homes and left thousands of people homeless.

In 2007 a tsunami following an 8.0-magnitude earthquake killed at least 52 people in the Solomons and left thousands homeless.