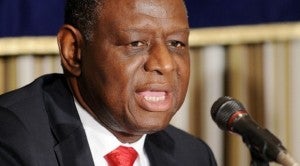 UNITED NATIONS – The world has changed dramatically since the U.N. population conference in Cairo in 1994 but the U.N. population chief said many issues remain as contentious as they were 20 years ago, including sexual rights, abortion, sex education, lesbian and gay rights, and child marriage.

Babatunde Osotimehin said in an interview with The Associated Press that he expects a weeklong meeting of the U.N. Commission on Population and Development that ends Friday to preserve the action plan adopted in Cairo by 179 countries, which for the first time recognized that women have the right to control their reproductive and sexual health and choose if and when to become pregnant.

The Cairo conference broke the taboo on discussing sexuality, adolescent sexual behavior and the real concerns of women and families — and Osotimehin said he hopes this meeting will also address some new challenges.

While there is a perception that the post-Cold War world is more conservative, he said, “I think we still have enough progressive forces around the world to ensure that we can continue to deliver on Cairo.”

The Cairo conference changed the focus of the U.N. Population Fund, which Osotimehin now heads, from numerical targets to promoting choices for individual women and men, and supporting economic development and education for girls. Underlying the shift was research showing that educated women have smaller families.

“All of us must accept that the sexual and reproductive health and rights of women, girls, young people, is central to human development,” Osotimehin said in an interview Wednesday.

At this week’s meeting, Osotimehin said, “we are trying to get sexual and reproductive health and rights” included in the final document.

But he said most delegates don’t want to include sexual rights because “they conflate it with the issues of sexual orientation and gender identity” and believe that sexual rights “means you are condoning or nuancing” gay rights.

“That’s a pushback,” Osotimehin said, but he keeps arguing that this interpretation is wrong and that women should have the right to control their own sexuality outside of being mothers or pregnant, including the issue of early marriage.

In discussions on families and new family formations, he said, the LGBT issue is also “still creating the fireworks it created 20 years ago.”

At the 1994 Cairo conference, delegates approved a platform recognizing that unsafe abortion is a fact that governments must deal with as a public health issue to save women’s lives. It did not condone abortion as a method of family planning or mention legalization.

Osotimehin reiterated that the world must address why 8.7 million young women aged 15 to 24 resort to unsafe abortions each year, but he said the issue of abortion remains contentious and he believes the language in the final document will be similar to Cairo’s.

What he would like included, he said, is recognition that the world has an opportunity to empower two billion young people under the age of 25 — including 600 million adolescent girls aged 13-19 — and ensure that they go to school, learn skills and get access to health care and comprehensive sex education.

With that, he said, “you actually have a powerful human force that will change the world.”