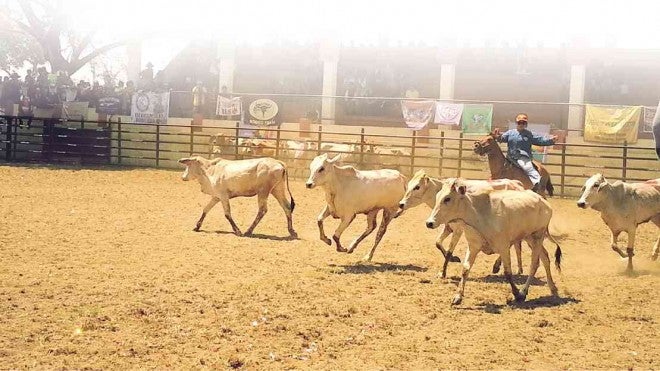 CATTLE ROUNDUP Cattle herding or cattle penning is one of the events in Rodeo Masbateño in Masbate City, which tests the competitor’s patience with coaxing at least 200 heads of cattle into a small pen. RONNEL JOSEPH COMPETENTE/CONTRIBUTOR

With both feet grounded on the small view deck put up at the rodeo arena in Masbate City, Leo Gozum scanned the rectangle of dusty soil where local cowboys would be competing for the glory of victory in this year’s Rodeo Masbateño.

Gozum, 40, rodeo director and head of the technical committee of Rodeo Masbateño Inc. (RMI), was taking charge of the activities while waiting for his daughters—Bella, 4, and Ria, 3—to arrive at Masbate City Rodeo Arena and watch the finals of the main events on a scorching Tuesday afternoon.

“I taught my kids how to ride horses even before they learned how to walk,” he proudly said.

Gozum is also a cowboy-cum-farmhand who teaches children as young as 3 years old and teenagers the basics of farm and ranch life for free, along with other colleagues, to qualify them for membership in Volunteer Rodeo Officials of Masbate (VROOM).

Members of RMI founded VROOM in 2002 with the avowed purposes of passing on the rodeo culture of Masbate to the next generation and of encouraging the young to ultimately go into cattle raising and farming to ensure the socioeconomic future of the agriculturally dependent province, Gozum said.

Twelve-year-old twins Destiny and Sofia Arizala, both members of the VROOM, are already considered experts in lassoing and penning of cattle, horseback riding, bull whipping, cattle branding and other skills needed for cattle raising.

Their father Sofronio, 51, a public elementary school principal, introduced them to farm animals early, they said. He taught them horseback riding when they turned 11.

The sisters have been training on basic and competitive rodeo skills since last year. Sofia plans to join the carambola (group cattle wrestling) event, while Destiny prefers the noncattle event of bull whipping.

“Kids will always feel fear at first (at riding horses and handling cattle), but we teach them how to treat animals correctly so they are not threatened and put in danger,” Gozum said.

The children are taught how to interact with animals, said John Paul Dimen, 27, Gozum’s second-in-command and himself a trainer of young rodeo enthusiasts.

At first, they learn how to ride horses and brand cattle. Later, they are trained to tackle mature cattle, weighing 350-400 kilograms.

Those comprising the first batch of VROOM students are already in college. Many have opted to take agricultural-related courses.

City Mayor Rowena Tuason described efforts of RMI with VROOM in training future farmhands and heirs of more than a hundred active ranches in Masbate as a good way of increasing production of cattle meat and livestock.

“Introducing more kids, even those who are from nonfarming families, early into ranch life would hopefully increase the number of cattle raisers that would, in turn, up the production of the province,” she said.

She noted the declining interest of youngsters in ranch life and farming. Over the past five years, more and more young Masbateños have chosen to enter the corporate world rather than become professional farmers and cattle raisers, she said.

Local officials and Masbateños who are passionate about keeping their rodeo legacy alive hope to reverse the situation.

Judge Manuel Lopez Sese of the Masbate City Regional Trial Court, who is the president of RMI, said the group would be putting up Rodeo Masbateño Academy next year in a 10-hectare ranch in Mandaon town, 61.7 kilometers from the city.

The academy will have an “inverted triangle” curriculum and offer free enrollment to out-of-school youths, Sese said. Instead of having basic courses like English and Mathematics on the first year of education, the students will be given hands-on training on horseback riding, cattle branding and other skills.

Succeeding years of study will focus on basic academic courses and will require subjects such as animal husbandry and animal raising.

Graduates will be considered degree holders and eligible to answer the growing demand for professional farmhands abroad, Sese added.

Aside from promoting the cattle industry, the judge said Rodeo Masbateño was geared toward attracting more tourists to the island-province.

Rodeo Masbateño is more than just a show of the local cowboys’ animal taming prowess but also an avenue for building stronger ties among families and clans through the promotion of rodeo culture in the province, Tuason said.

On Tuesday, Natz Ramizo, 43, who had worked in Dubai, treated his children—Adrianne Leigh, 13; Marie Beatriz, 11; Shane Marie Suzanne, 9; and Tristan Emmanuel, 5—to their first Rodeo Masbateño experience. He said he wanted his children to absorb the rodeo culture and become immersed in its activities themselves.

Although he comes from Barangay Tugbo, Masbate City, Ramizo said he was also attending his first Rodeo Festival even though the event was founded over two decades ago in 1993. His wife, Marie Lou, 42, is still working in Dubai, he said.

Susan Ubaldo, 43, always brings her daughter Alyzza, 9, to the Rodeo Masbateño every year, enduring a 32.9-km journey from their home in the town of Uson

Ubaldo said the festivities had always been among the highlights in her family life despite the distance of their home from Masbate City.

The rodeo teams competed in the final national events of cattle wrestling (on foot and on horseback), carambola, bull whipping, “load carrying” and “casting down” on Tuesday. The next day, it featured a beef cooking contest for young chefs and the festival finale, “cattle drive,” which involved the herding of some 150 heads of cattle from the city center to the Rodeo Arena.

The cattle drive recreated the traditional way of transporting cattle from the ranches to the city port.