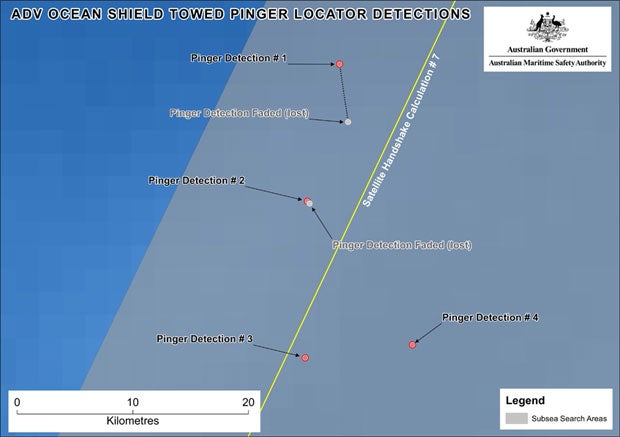 This image provided by the Joint Agency Coordination Center on Wednesday, April 9, 2014, shows a map indicating the locations of signals detected by vessels looking for signs of the missing Malaysia Airlines Flight 370 in the southern Indian Ocean. AP

“Ocean Shield has now detected four transmissions,” he said as searchers try to poinpoint wreckage from the Boeing 777 that disappeared on March 8 with 239 people on board.

The last two transmissions were picked up on Tuesday. The first lasted five minutes and 32 seconds and the second approximately seven minutes.

He told a press conference that experts analysing the first two pulse signals detected by an Australian ship earlier this week believe they are consistent with a flight data recorder.

“They believe the signals to be consistent with the specification and description of a flight data recorder,” Houston said.

The retired air marshal said he was confident the hunt was now in the right area but a sighting of wreckage was needed to be certain.