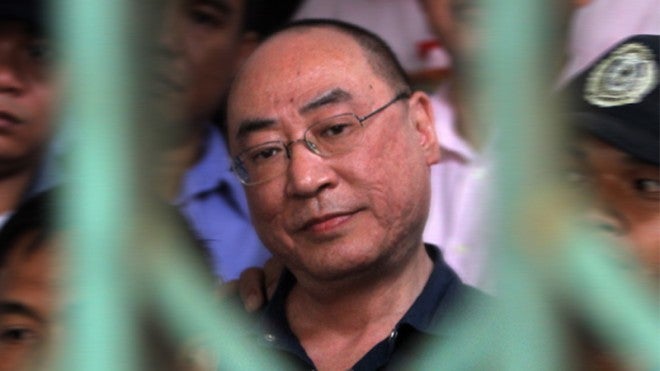 MANILA, Philippines—Delfin Lee’s real estate development company, Globe Asiatique Realty Holdings, enjoyed preferential treatment from the Home Development Mutual Fund, or Pag-Ibig, when it was given more than P5 billion worth of funding commitments before it was blacklisted in 2010 for alleged irregularities.

Darlene Berberabe, who became Pag-Ibig president in 2010, told a hearing of the Senate committee on urban planning, housing and resettlement on Tuesday that Globe Asiatique was also given P2 billion worth of loans for its home buyers in 2008.

Under Pag-Ibig’s agreement with Globe Asiatique in 2009, Lee’s company also had the sole distinction of being the only firm that was allowed to buy back from Pag-Ibig the foreclosed properties in its developments in five years, Berberabe said.

Other so-called Window 1 developers were given a buy-back period of only two years, she said.

Window 1 developers are those firms allowed by Pag-Ibig to process loan applications and choose buyers in their respective developments.

Asked how many developers had this kind of arrangement with Pag-Ibig, Berberabe said: “There’s only one. It’s only GA (Globe Asiatique).”

Berberabe acknowledged that Globe Asiatique had a good reputation as a developer in those days.

“[It was given] awards for being an outstanding developer. … There was nothing in the records that Pag-Ibig red-flagged at that time,” she said.

Former Vice President Noli de Castro, who was the chair of the Housing and Urban Development Coordinating Council and Pag-Ibig at the time, said there was no special treatment for Globe Asiatique, only a special arrangement.

“The only reason why it became P5 billion is only to [ensure] that there would be continuous funds for the developer because the project was huge. It was a township project,” De Castro said referring to Globe Asiatique’s Xevera II township project in Mabalacat City, Pampanga province.

De Castro suggested that the project was deemed quite beneficial to the home buyers because it was a complete community with provisions for a school, a church and a commercial center.

“That was the only difference, conditions and warranties of P5 billion and a five-year buy-back for GA,” De Castro said.

Sen. JV Ejercito, the committee chair, said the township project was quite laudable, “but the committee would want to know where the scam exploded.”

“It was quite conspicuous that [Globe Asiatique] was able to take out a huge loan of P7 billion. There were 200 other developers qualified under Window 1, that’s why however you look at it, Globe Asiatique enjoyed special treatment at that time,” Ejercito told reporters during a break in the hearing.

But as part of the courtesy extended to a fellow legislator, Ejercito said it was up to Quimbo to attend or skip the hearing.

Ejercito said Quimbo should explain the P2 billion released to Globe Asiatique before he resigned in 2009.

In a radio report, Quimbo said he was willing to attend the Senate hearing.

Quimbo claimed that he had been virtually exonerated by Berberabe when she recounted that it was his successor who gave the green light for the release of P5 billion to Lee’s Xevera township projects in Pampanga. (Quimbo was succeeded as Pag-Ibig president by Jaime Fabiana, who served until 2010.)

But in a text message sent after the hearing, Berberabe clarified that she was leaving it to the committee members to discern who were the culprits in the P6.6-billion Globe Asiatique scam.

“What I did was simply to share the timeline of events based on the documents that I studied. It is for the committee to make a conclusion as to which acts are noteworthy or which are sticking out as blameworthy,”  Berberabe said in a text message.

“I didn’t exonerate or blame anyone. I tried to be as factual as possible,” she said.

Globe Asiatique president Lee did not attend Tuesday’s hearing because his subpoena had not yet been signed by Senate President Franklin Drilon.

“Mr. Lee cannot attend the hearing without a subpoena because he is under arrest. If his warden brought him to the Senate without a subpoena, he’d be out of a job by now,” Lee’s lawyer, Willie Rivera, said in a phone interview.

In a statement issued through Rivera, Lee said it was “unfortunate” that he could not attend yesterday’s hearing and was deprived of a chance to explain the real issues behind the accusations being made against him by the current Pag-Ibig management.

“I reiterate my earlier statement of my readiness to testify and vow to fully cooperate in the scheduled Senate inquiry. I am appealing to the honorable senators to give us the chance, including the thousands of home buyers of Globe Asiatique who have one way or another been gravely affected by this ‘hoax and big joke’ perpetuated by the current officials of the people’s fund,” Lee said.

Rivera said he was hopeful that the Senate would sign the subpoena for Lee in time for the next hearing to ensure Lee’s attendance.

Ejercito said the committee would ensure that Lee would attend the next hearing with the issuance of a subpoena.