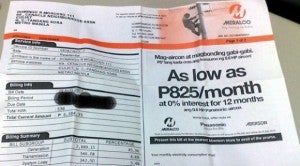 MANILA, Philippines—Consumers of electricity will see an increase of P0.89 per kilowatt-hour (kWh) in their April bills  due to higher power generation costs and related charges, combined with growing demand for power amid the summer heat,  the Manila Electric Co. said Tuesday.

“The all-in increase is P0.89 per kWh. Of that, the generation charge increase is P0.69 per kWh,” Meralco spokesperson Joe Zaldarriaga said in a phone interview.

Lawrence Fernandez, head of Meralco’s utility economics section, said via text message that the all-in April rate for an average household consuming 200 kWh a month would be P11.49 per kWh, which translates to a bill of about P2,298.51.

Previously, the all-in rate for the same consumption was P10.60 per kWh, which translated to a bill of about P2,119.60 in March.

Primarily, Meralco said, the generation charge surged because of the tight supply situation brought about by the outage of several large power plants. In addition, demand increased by 200 MW (roughly equivalent to the consumption of 10 large malls using airconditioning) compared with the March level, Meralco said.

Power demand tends to increase in the summer due to more frequent use of airconditioners and other appliances.

The cost of producing power grew to P5.90 per kWh this month from P5.21 per kWh in March, primarily driven by spot market spikes, Meralco said.

Besides the increase in the generation charge, transmission charge and taxes also went up by P0.03 and P0.11 per kWh, respectively.

The distribution charge has not changed since July 2013, Meralco said.

The Wholesale Electricity Spot Market prices went up to P21.59 per kWh during the March supply month from P4.90 per kWh the previous month, for an increase of P16.69 per kWh. Though demand for the March supply month increased, Meralco only obtained about 4 percent of its power requirements from WESM. With Meralco’s purchase from the WESM the previous month being at around the same level, WESM rates, therefore, increased because of higher prices at the market.

Scheduled and emergency power plant outages affected the April generation charge, as did lower output in some plants, Meralco said.

Meanwhile, Meralco said, a P0.20 per kWh increase in the average cost of power sourced from the Power Supply Agreements (PSAs) was mostly offset by a P0.19 per kWh reduction in the rates of the Independent Power Producers (IPPs). PSAs increased from P4.57 per kWh to P4.77 per kWh, while IPP rates went down from P5.63 per kWh to P5.44 per kWh. In terms of share to Meralco’s total power requirements, PSAs and IPPs accounted for 51 and 45 percent, respectively. Meralco said its PSAs remained the lowest cost source of supply.

The National Grid Corp. of the Philippines earlier said that there were several days of yellow alert in Luzon, which meant power supply would be tight but no outages would take unless a major facility shut down.

Meralco, in turn, said that since a number of power plants were still scheduled to go on maintenance shutdown in the coming months and that demand for power was expected to be high for the remainder of the summer season, the distribution utility signed Interim Power Supply Agreements (IPSAs) with various power suppliers to lessen exposure to the WESM during this period.

In a related development, Meralco said Therma Mobile, Inc. (TMO) was currently supplying it with 150 MW. This will increase to 200 MW starting April 15 and will go up to 234 MW by end of the month, Meralco said.

Customers would do well to observe energy efficiency practices to help manage their consumption, and hence their electricity-related expenses, especially during the summer months, Meralco said.

Meralco stressed that it does not earn from the pass-on charges, such as the generation charge, which is the single largest component of the electricity bill. Payment for it goes to the power suppliers such as the plants selling to Meralco through the WESM and under the PSAs, as well as the IPPs. Meralco’s distribution, supply, and metering charges account for only about 18% on the average of the total electricity bill.

Meralco bills up this month until July