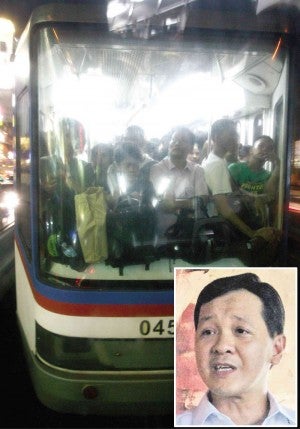 OVERLOADED FOR A DECADE Built to move 320,000 passengers daily, the MRT started exceeding its capacity in 2004, five years after its launch, according to general manager Al Vitangcol (inset).

MANILA, Philippines—Al Vitangcol, the controversial general manager of Metro Rail Transit (MRT), has a beef with the media.

In a Senate hearing Monday, Vitangcol said it always puzzled him to see the press having a field day reporting the long queues at MRT stations and then turning silent whenever the long lines disappear.

“We’re at a loss why—when there are long lines at MRT—they are suddenly reported on television and on radio. But when the lines are gone, the media is silent,” Vitangcol said when asked by Sen. Francis Escudero what the MRT intends to do with the rush-hour queues that often extend up to streets.

Escudero gave Vitangcol a quick explanation that seemed to be drawn straight from Journalism 101: “That’s no longer news.”

The Senate hearing tackled the delayed projects of the Department of Transportation and Communications (DOTC) and saw the grilling of the MRT official, who is also embroiled in allegations of extortion in connection with MRT plans to buy new trains.

Vitangcol admitted that the train line was particularly congested in the week after March 23, when its communication and signaling systems broke down.

The management conducted a widespread evaluation of the MRT facilities, which required train speeds to be “reduced drastically,” he explained. “After that one-week period when we were able to establish that the system is good, reliable, and safe … we resumed normal speeds and restored the normal [number of] trains running.”

“If we will look at our stations now, we no longer have those kinds of lines. Now, there are only minimal queues,” Vitangcol said.

Still, the official acknowledged that the MRT, which started operations in 1999, had far exceeded its intended capacity.

The long-term solution, he said, would be the purchase of additional coaches, the first of which won’t arrive until 2015.

“Commuters will feel the convenience of taking the MRT when all the coaches arrive, which may happen in late 2015 or early 2016,” Vitangcol told reporters after the hearing.

The new coaches should have been bought way back during the Arroyo administration, he said. “If we will look at the data, the ridership way back in 2004 or 2005 reached more than 400,000 passengers per day, which was (already) way beyond the designed capacity of 320,000 per day.”

“So that means that during that time, the management and owner of MRT should have procured additional trains for the convenience of the passengers,” he said.

But in Escudero’s view, the delayed improvements on the train system on Edsa may be blamed on the MRT’s corporate structure.

“The current system governing the MRT Corporation’s operational control and ownership remains a contentious issue that impedes the future development of the MRT,” the senator noted.

“The MRT system’s corporate structure is a mess,” he said. “Until now, the issue as to who has the right to what (and) what the government’s rights are under the BLT (build-lease-transfer) contract has yet to be settled.”

Even during the past administrations, he recalled, the government and the MRTC “had been at loggerheads as to who should shoulder the acquisition of additional new trains.”

“Apparently, for 12 years, the MRTC and the government stared at each other. When the government finally decided to buy new trains, the private counterpart filed an injunction to the detriment of the riding public,” Escudero said.