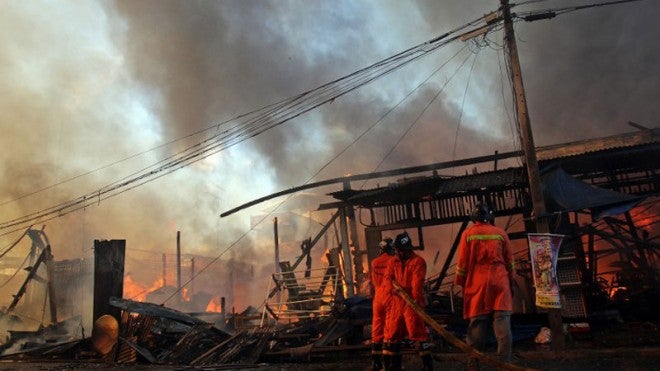 Thai firefighters attempt to extinguish a fire at the site of a car bomb that killed one and wounded 14 people in Thailand’s restive southern province of Yala on Sunday, April 6, 2014. Thailand’s three Muslim-majority southernmost provinces are in the grip of a decade-long insurgency which has seen 6,000 people killed—the majority of them civilians. AFP PHOTO/MUHAMMAD SABRI’

BANGKOK—One person was killed and 14 wounded Sunday in a series of apparently coordinated blasts—including a car bomb—in a major town in Thailand’s insurgency-hit south, the army said.

Four explosions rocked Yala, a provincial capital, on Sunday afternoon including a device hidden in a car which destroyed the vehicle and damaged several nearby buildings.

Car bombs are rare in the Muslim-majority south, which has seen near-daily shootings and bomb attacks in a decade-long rebellion against Thai rule.

The charred and mangled wreckage of the car remained in the street hours after the blast as plumes of thick smoke spiraled into the air, according to an AFP photographer.

“One of the devices was hidden in a car which was stolen a long time ago. The car had also been used for several robberies,” he said.

A second bomb hidden in a suitcase killed one person, he said, while two smaller devices hit a market and a bank.

Yala is one of three Muslim-majority southern provinces afflicted by an insurgency that pits shadowy rebels, seeking a level of autonomy for the region, against Thai troops and police.

Around 6,000 people have been killed in the festering conflict—the majority of them civilians caught between the warring sides.

Several rounds of peace talks last year had raised hopes of progress toward a peace settlement. But a six-month-old political crisis in Bangkok has seen the negotiations suspended.

During the hiatus rebels have stepped up the violence, attacking “soft” non-military targets.

Observers say the spike in violence is in response to Thailand’s failure to respond to rebel demands to work toward a road map for peace.

Last week three government officials—two of them women—were shot dead in an ambush. One woman’s body was then decapitated and left on the roadside.

Many local ethnic Malay Muslims accuse Thai authorities of widespread human rights abuses and a lack of respect for their religion, culture and language.

Those grievances are seized upon by the militants as a reason for targeted killings of representatives of the Thai state, including teachers, government officials and security forces.

Rights groups accuse security forces of acting with impunity and inflaming the situation with heavy-handed tactics.

But they have expressed hope the stalled peace process will be revived, especially as Thailand appears now to recognize the need for a political solution to the 10-year conflict.