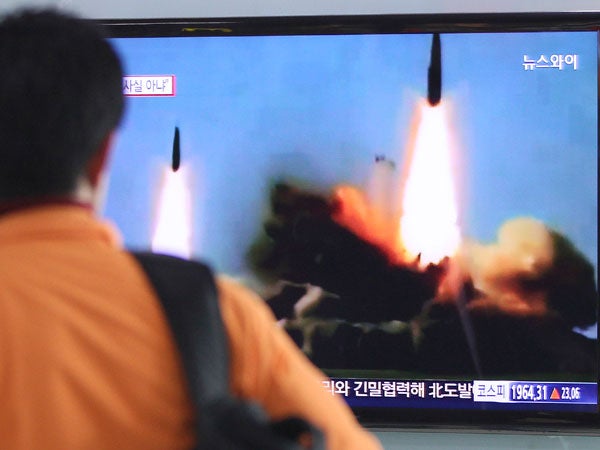 SEOUL – North Korea has slammed the South’s recent ballistic missile test, calling it a “farce” aimed at showing off Seoul’s military strength in the face of threats from Pyongyang.

Seoul said Friday it had successfully test-fired a new ballistic missile capable of carrying a one-tonne payload up to 500 kilometers (310 miles), suggesting it could hit any part of the North.

The launch was carried out on March 23, just three days before the North test-fired two medium-range ballistic missiles capable of striking Japan.

A spokesman for the North’s military heaped derision on Seoul’s rocket test late Saturday, pointing to its range of “just 500 kilometers.”

“Great irony is that (the South is) claiming that they did a great job by conducting a test-fire of a ballistic missile with a range of just 500 kilometers,” state-run KCNA quoted the official as saying.

Tensions between the two Koreas were heightened further by rare exchanges of fire across the tense Yellow Sea border on March 31.

The North dropped more than 100 shells across the sea border during a live-fire drill, prompting Seoul to fire back about 300 volleys.

The North’s spokesman claimed the South’s “poor military reaction” to the drill drew criticism at home, leading it to carry out the missile test to “calm the mounting accusation and derision”.

“This farce only brought disgrace to them,” said the spokesman.

The isolated and nuclear-armed North is known to have mid-range Rodong-class missiles capable of hitting targets 1,000-1,500 kilometers away.

Pyongyang’s test-firing of two Rodong missiles on March 26 — its first launch of a mid-range missile since 2009 — followed a series of rocket and short-range missile tests by the North in recent weeks.

The launches were seen as an angry protest at Seoul-Washington joint army drills ongoing in the South, which the North habitually slams as a rehearsal for invasion.

South Korea’s new missile was developed under an agreement reached with the US in 2012 to near-treble the range of the South’s ballistic missile systems.

In return, Seoul accepts limits on its missile capabilities.

The 2012 agreement — denounced as a provocation by Pyongyang — allows Seoul to deploy missiles with a maximum range of 800 kilometers.

The US also stations 28,500 troops in the South and guarantees a nuclear “umbrella” in case of atomic attack.