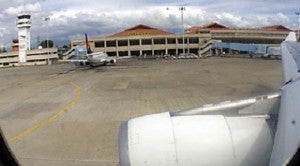 MANILA, Philippines—The Department of Transportation and Communications (DOTC) on Saturday said it was standing by its decision to award the P17.5-billion Mactan-Cebu International Airport contract to the GMR-Megawide consortium, even as Sen. Sergio Osmeña III stepped in to stop the project.

“Amid all the noise drummed up in different forums the past few months, the DOTC has allowed nothing but the law and the country’s interests to matter in awarding the project,” said Michael Sagcal, the department spokesperson, in a statement.

“This project should have been done at least a decade ago, so there is no more time to waste,” he said.

Sagcal said it took the DOTC several months to arrive at last Friday’s award and they were confident that “from a legal and objective standpoint, there should be no reasonable challenges.”

Last Thursday, a day before the DOTC awarded the public-private partnership (PPP) project to upgrade the passenger terminal of the Mactan-Cebu international airport to GMR-Megawide, Osmeña went to the Supreme Court, the only entity with the authority to halt an infrastructure project, and asked it to stop the award of the concession agreement.

The tender for the project was held last year but the contract award was delayed for almost three months as the government investigated allegations by a losing bidder, Filinvest-CAI, that GMR-Megawide did not have the financial capability to undertake the project.

Filinvest also called for the disqualification of GMR-Megawide, which outbid six other bidders, alleging conflict-of-interest violations. GMR-Megawide is a partnership between the Philippine-based Megawide Construction Corp. and the GMR Group, an infrastructure company based in Bangalore, India, which has interests in airports, energy and highways.

The conflict-of-interest allegation involves a key official of Malaysia Airports Holdings—which is a partner of a rival bidder for the Cebu airport deal—who is also a director of two airports that GMR operates in India.

GMR-Megawide has said the allegation was baseless as the official in question was never involved in the bidding for the Cebu airport deal.

Osmeña asked the Supreme Court to nullify the finding by the prequalification bids and award committee (PBAC) that GMR-Megawide was a qualified bidder.

He also asked the high tribunal to stop the PBAC, the DOTC and the Mactan-Cebu International Airport Authority from issuing a notice of award or a concession agreement to the consortium.

“The Filipino people, especially the Cebuanos, do not deserve another Piatco,” he said in his petition.

More important, the public does not need to be serviced by an operator “with a derogatory track record and a recent history of financial operating losses,” he said.

Sagcal said the DOTC’s priority was to get the winning bidder to move the project forward. Over the next three to four years, GMR and its local partner will renovate Mactan’s passenger terminal, build a separate one for international flights, and operate the improved facility with an expected annual turnover of eight million passengers.

Under the contract terms, the new facility reverts to government ownership and control after 25 years.

The DOTC said GMR-Megawide has 20 days to complete the post-award requirements before signing the concession agreement, as provided for under the BOT (Build-Operate-Transfer) Law. But recent experiences have shown that delays can happen even at this late stage.

“A delay is possible but, of course, we will try to expedite everything. This project should have been done a long time ago,” said Sagal.

In a statement, GMR-Megawide CEO and chair Michael Cosiquien vowed to “deliver a world-class airport that Cebuanos and Filipinos will be proud of.” With a report from TJ Burgonio