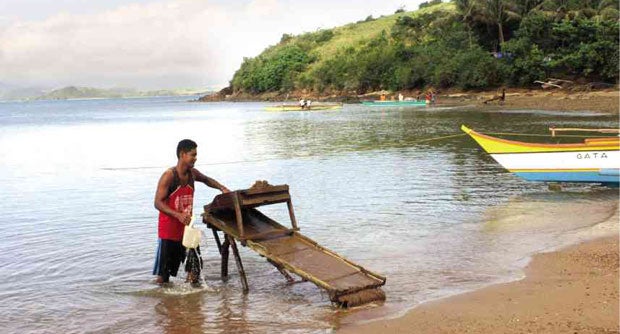 Through gold deposit is good for only small-scale mining, according to the Mines and Geosciences Bureau, the precious mineral is being panned for even on shores. Jay de Leon earns P150 a day panning for gold on the beach of Barangay Gata in Lahuy Island in Caramoan town, Camarines Sur province. JUAN ESCANDOR JR./INQUIRER SOUTHERN LUZON

NAGA CITY — The head of the environment watchdog unit in Camarines Sur province on April 1 filed countercharges against the village head of Barangay Gata in Lahuy Island in Caramoan town, Camarines Sur, where four small-scale miners were shot dead on March 22.

Fermin Mabulo, head of Sagip Kalikasan Task Force (SKTF), said Mercy Sueno, village head of Gata, and Councilor Maximino Breis Jr. were conducting mining activities in Lahuy but did not get proper permits and clearances from authorities in violation of Republic Act No. 7076, or the People’s Small-scale Mining Act, and other pertinent laws.

Two alleged SKTF members are facing murder charges in the Regional Trial Court of San Jose town for the death of the four miners. One of the two, Servillano Espares, is now in the custody of the Bureau of Jail Management and Penology in Tigaon town while a certain Joel Beriso remains at large.

Sueno said in a phone interview on April 3 that she was expecting the countercharges from Mabulo. She said it was a form of retaliation for the four counts of murder filed against the SKTF members.

She said she had not yet received any subpoena from the provincial prosecutor’s office on the complaint filed against her but that she was determined to face the charges.

Mabulo, in his complaint, claimed that Sueno’s husband, Ronnie, threatened Espares with a bolo on Dec. 26, 2013.

But Sueno said the allegation was a lie meant to cover up the murder.

According to Mabulo, an SKTF inspection team he created found out on Dec. 4 last year that there were at least 30 persons conducting illegal mining activities using machinery and equipment, including a generator set with an attached submersible pump, in Sitio Tila. He said some of the workers were hired by Sueno and Breis.

Mabulo said they “rounded up the people found mining in the site and asked if they had the necessary permits and documents, as required by law on the extraction of minerals. But the persons present in the area failed to produce any relevant document.”

He said they asked those rounded up to stop their illegal mining activities while he assigned SKTF enforcers to the area.

Mabulo said Sueno had asked permission from Tria on Dec. 10 last year “to operate and use the ball mill beside her residence to grind the gold ores extracted from illegal mining activities but she was not allowed for failure to show the necessary permit and documents.”

“The SKTF enforcers faced and suffered threats, intimidation and even physical harm from Sueno and her family, and Breis and their people,” Mabulo claimed.

He cited other incidents, such as when SKTF enforcer John Paul dela Cruz was chased by four unidentified persons on Feb. 10, the setting on fire of SKTF’s barracks on Feb. 11 and death threats to SKTF enforcer Bernardo Sedeno Jr. by one Pedro Galvez who was accompanied by Ronnie Sueno on

Mabulo said that on Feb. 16 this year, Sueno, with eight uniformed village watchmen who were armed with bolos, arrived at the site and claimed ownership of the generator set with a submersible pump.

On March 22, Mabulo added that there was a confrontation between Tria and Sueno when the latter started grinding gold ore but was prevented by Tria because she could not show a permit except a barangay resolution addressed to the town council asking help for the endorsement of Barangay Gata as a “Minahang Bayan.”

Rommel Pestaño, regional director of the Mines and Geosciences Bureau (MGB), told the Inquirer in a recent interview that he was aware of the mining activities in Gata but that “the villagers are only reworking on the old pre-World War tunnels in the area.”

Sueno said gold mining in Gata was started by Dutch nationals in the prewar era but who abandoned the mining site during World War II.

Pestaño said he was aware that since December, the small-scale miners in the area had stopped operations and the people, through barangay officials, were applying for permits from the MGB and the Department of Environment and Natural Resources so that their village could be declared a Minahang Bayan.

A Minahang Bayan, according to the People’s Small-scale Mining Act, allows communities to operate small-scale mines.

The approval of the permit for such is decided by the Provincial Mining Regulatory Board, composed of the MGB regional director as chair, the governor as vice chair and representatives from small-scale and large-scale miners, and nongovernment organization as members.

Pestaño said no mining permit had been issued in Barangay Gata but two large-scale companies—Alti Philippines and Minimax Mineral Exploration Corp.—had applied for mining exploration permits in 2010 and 2011. However, they were rejected.

Pestaño said that prior to the killing, the barangay officials were able to submit a resolution for the Minahang Bayan application from the barangay council other documents, while he sent two technical staffers to Barangay Gata.

Asked whether mining would be appropriate on the island given the carrying capacity of Lahuy Island, Pestaño said small-scale mining could proceed if the application for a Minahang Bayan was approved.

He said the technical staff of the MGB stayed for two days on the island and found that small-scale mining and the prospects for a Minahang Bayan were good.

Pestaño said that in the meantime, he had ordered the mining activities stopped until the approval of the Minahang Bayan application. Juan Escandor Jr., Inquirer Southern Luzon