US strongly committed to protecting Japan 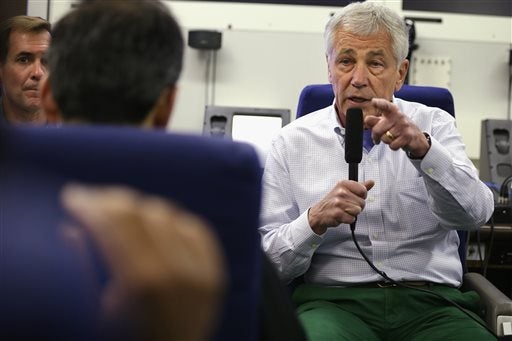 YOKOTA AIR FORCE BASE, Japan — Against the backdrop of Russia’s takeover of Ukraine’s Crimean region, Defense Secretary Chuck Hagel said Saturday that a key message he will deliver to leaders in Tokyo this weekend is that the U.S. is strongly committed to protecting Japan’s security.

Hagel said it is understandable for nations to be concerned as they watch the events unfold in Ukraine, where Russian troops are still massed along the border. The issue reverberates in Asia where China, Japan and other nations are locked in bitter territorial disputes, including over disputed islands in the East China Sea.

“It’s a pretty predictable, I think, reaction, not just of nations of this area and this region but all over the world,” Hagel told reporters traveling with him to Tokyo. “I think anytime you have a nation — Russia in this case — try to impose its will to refine and define international boundaries and violate the territorial integrity and sovereignty of a nation by force, all of the world takes note of that.”

Assistant Secretary of State Daniel Russel also said this week that Russia’s annexation of Crimea heightened concern, particularly among some Southeast Asian nations, about the possibility of China “threatening force or other forms of coercion to advance their territorial interests.”

While the U.S. has repeatedly said it takes no side on the question of the disputed islands’ sovereignty, it recognizes Japan’s administration of them and has responsibilities to protect Japanese territory under a mutual defense treaty.

Hagel said Saturday that the U.S. wants the countries in the region to resolve the disputes peacefully. But he added that the U.S will honor its treaty commitments to protect Japan when needed.

Asked whether the inability of the U.S. and its international partners to stop Russia might give Asian nations reason for worry, he said the allied response for Ukraine has been significant. And while he said there is no military solution to the problem, the diplomatic and economic sanctions imposed on Russia have isolated that nation and “there will be consequences for that.”

Hagel’s trip to Japan comes at the close of a three-day meeting in Hawaii with defense ministers from Southeast Asian nations. And he will later travel to China, where he said he looks forward to talks about expanding military cooperation as well as the chance to air differences on the disputes.

He said he will encourage Chinese leaders to abide by the international code of conduct.

China has expressed displeasure about recent moves by the U.S. to provide additional military assets and support to Japan.

Last October, the U.S. and Japan agreed to broad plans to expand their defense alliance, including plans to position a second early-warning radar there by the end of this year. There is already one in northern Japan and the second one would be designed to provide better missile defense coverage in the event of a North Korean attack.

The U.S. will also begin sending long-range Global Hawk surveillance drones to Japan this month for rotational deployments, and they are intended to help step up surveillance around the Senkaku islands, a source of heated debate between Japan and China which both claim the remote territories as their own.