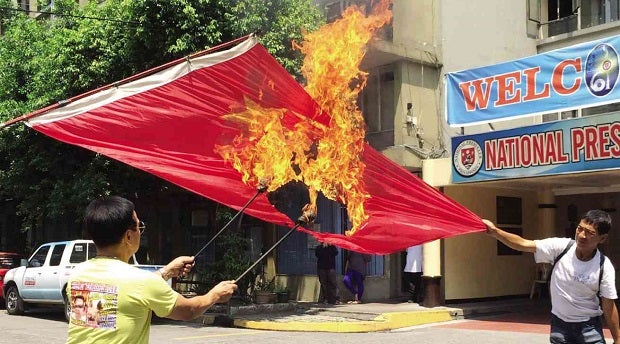 BURN, BABY, BURN Policeman-turned-politician Abner Afuang (left) torches the Chinese flag in a protest action Friday against the Asian giant’s latest “bullying” of the Philippine Navy in disputed, resource-rich waters that have long been established to be part of Philippine territory. MARICAR BRIZUELA

Preferring the torch over tact, retired policeman and former town mayor Abner Afuang set the Chinese flag on fire for the second time this year to denounce the reported harassment of a Philippine Navy vessel by the Chinese coast guard on Ayungin Shoal last week.

“What the Chinese are doing is just too much. We Filipinos should learn to fight now,” Afuang said in another one-man protest action Friday in front of the National Press Club in Manila.

“Burning a flag and expressing my opinion this way may be expensive but I am doing it for our nation and for the Filipinos,” he said, noting that procuring the flag—just to have it destroyed in seconds—now cost him around P600. It cost only P300 two years ago, he noted.

“There are no coward Filipinos,” the former Makati City police officer and mayor of Pagsanjan, Laguna province, said as he called on his countrymen to stand up to “Chinese bullying.”

On March 29, two Chinese coast guard craft reportedly blocked and harassed a Philippine vessel carrying soldiers and journalists on its way to deliver supplies to the BRP Sierra Madre, a World War II vessel deliberately grounded in 1999 to serve as a Navy outpost.

Afuang also burned the Chinese flag at the NPC on Feb. 6 to protest the cancellation of visa-free travels to Hong Kong for Filipino officials and diplomats over the Aquino administration’s refusal to issue an apology for the deadly August 2010 hostage crisis at Quirino Grandstand.