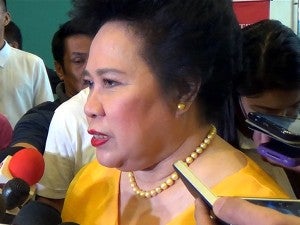 OLONGAPO CITY, Philippines—Sen. Miriam Defensor-Santiago could not help but gloat over the plunder cases filed against three of her colleagues, when she addressed 500 graduates of Gordon College here on Wednesday.

But Santiago’s key message to the graduates was positive: “I encourage you to work in government and change the system.”

She also shared what she described as “good news.” She said the Office of the Ombudsman has charged Senators Juan Ponce Enrile, Jinggoy Estrada and Ramon Revilla Jr. with plunder for allegedly taking kickbacks from ghost projects financed by their pork barrel funds.

She said she would like the Ombudsman to charge the other senators already identified by the whistleblowers who worked for detained businesswoman Janet Lim-Napoles, the suspected mastermind of the pork barrel scam.

Santiago urged the graduates to enter politics in the future, saying the alternative scenario would be that “criminals” would be left leading the country.

She said they should shoulder the burden of leadership in their community. Given this responsibility, she said, the graduates should encourage their families and relatives to exercise their right of suffrage and vote for those who would choose what would be “best for your community.”

“That is why I have come to Gordon College. I come to challenge you, seize this opportunity, seize this moment, stop corruption now,” Santiago said.

She expressed her admiration for the students who completed the college courses despite having “corrupt senators who stole the nation’s wealth” and made the lives of young people difficult.

Like in her other graduation speeches, Santiago delivered some of her signature pick-up lines:

“Hindi ba, ang mga gadyet kapag nagloko, namamatay. Dapat ganyan din ang mga pulitikong nanloloko, namamatay din (When there’s something wrong with a gadget, it dies on you, right? That should happen also to politicians who do us wrong).”