Robot subs join search of MH370 in the dark deep 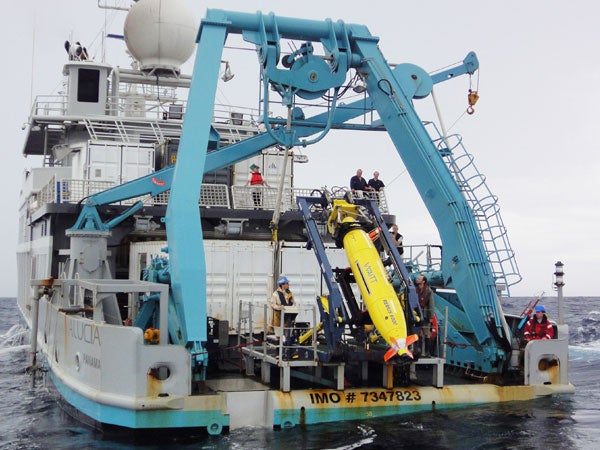 This 2011 photo provided by Sylvain Pascaud shows the ship Alucia and the REMUS 6000 robot sub during the search for Air France Flight 447. Unmanned subs, also called autonomous underwater vehicles, played a critical role in locating the wreckage of the lost Air France jet, two years after it crashed in the middle of the south Atlantic. AP PHOTO/SYLVAIN PASCAUD

Two miles down or more and darker than night, the ocean becomes a particularly challenging place for human searchers.

If the wreckage of a missing Malaysian airliner rests in the Indian Ocean’s depths, then investigators will likely need to entrust the hunt at least partly to robot submarines and the scientists who deploy them to scan remote swaths of the seafloor.

Such unmanned subs, called autonomous underwater vehicles, or AUVs, played a critical role in locating the carcass of a lost Air France jet in 2011, two years after it crashed in the south Atlantic. The find allowed searchers to recover the black boxes that revealed the malfunctions behind the tragedy.

Even then, it required two years and four deepwater search missions before a team from Woods Hole Oceanographic Institution, using an AUV, located the jet 3,900 meters underwater.

“Air France 447 is a bit different from Malaysian Air MH370 in that we had a few more clues to work with,” said Dave Gallo, who led the search team from Woods Hole, located on Massachusetts’ Cape Cod.

The independent research institution has offered its services to investigators but has not been asked to join the search effort.

Before unmanned subs can be sent down to look for the Malaysian jet, the search zone must be narrowed considerably. That depends on finding wreckage on the surface.

The size of the search area changes daily because of factors such as currents. On Wednesday it was 221,000 square kilometers (85,000 square miles).

If investigators can zero in on an approximate crash location, they will likely turn to AUVs to begin the methodical task of tracking back and forth across the ocean floor.

“I like to think of it as mowing the lawn. You want to cover every bit of it,” Gallo said. “You need a little bit of luck and a lot of prayer that the oceans are going to cooperate, and then off you go.”