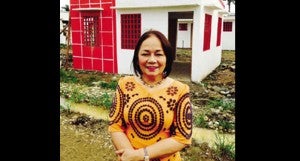 DAVAO CITY, Philippines—Davao Oriental Gov. Corazon Malanyaon denied Tuesday that she ever coursed her allotments from the Priority Development Assistance Fund to the controversial  National Agribusiness Corp. (Nabcor) while she was a member of the House of Representatives.

Malanyaon issued the denial following a TV report that she was among 79 lawmakers who had dealings with Nabcor involving projects supposedly to be implemented by bogus non-governmental organizations.

“I only heard of this government corporation when the Department of Agriculture informed my congressional office that my district would get mechanical driers,” Malanyaon said. “I have not made Nabcor a conduit for my PDAF as far as I can remember.”

She said that when she was told of the mechanical driers, all she did was to provide the names of irrigators and farmer and an association of farmers as beneficiaries.

“I presumed that was a legitimate assistance of the DA to agricultural provinces like ours,” Malanyaon said, adding she never participated in the purchase and identification of the items.

“Certainly I would welcome any item I could bring home to my farmers. This had nothing to do with my PDAF,” Malanyaon added.

Nabcor’s reported involvement in the pork barrel scam led to the agency’s abolition.

In Kabacan, North Cotabato, 16 Nabcor workers have since lost their jobs after the company closed in December last year.

Rosauro Paniza, Nabcor manager there, said each of the employee received P52,000 in separation pay after working there for the past seven years.

He said the amount was not enough to support the displaced employees’ families.

Roel Ignacio, a worker at Nabcor, said he spent the money he got to pay debts.

Ignacio said that to support his family, he now drives a tricycle.