Syrians adjust to life without limbs 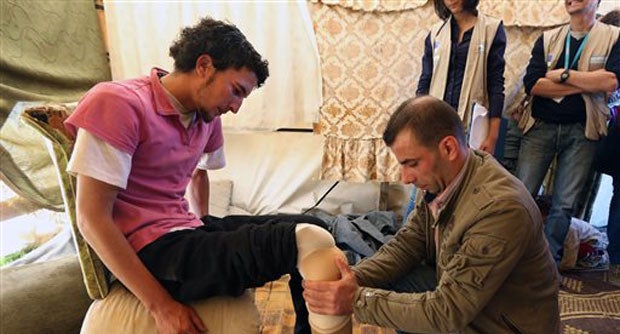 In this Thursday, March. 27, 2014 photo, Mustafa Ahmad, left, a 19-year-old who lost his leg in his hometown of Deir Hafer in Aleppo province in November 2011 when government warplanes bombed his neighborhood, is fitted with a prosthetic leg by a Lebanese prosthetic limb maker, right, at the Syrian refugee camp in Jib Janine, in the Bekaa valley, Lebanon. AP

JIB JANINE, Lebanon—Grimacing, Mustafa Ahmad slid the scarred stump just below his right knee into his new prosthetic leg. Extending his arms for balance, he slowly rose and hobbled across the packed dirt floor toward the door of his ramshackle tent.

Wild-haired children peered through a gap in the plastic sheet that serves as the wall of his tent, trying to catch a glimpse of the procedure that finally fitted Ahmad with a prosthesis, more than two years after losing his leg during a bombing raid on his hometown in northern Syria.

“I feel like I want to take a long walk, to go see my friends and neighbors,” he said later, his forehead glistening with perspiration. “I feel like my leg is back. I feel normal, like I’m back the way I was.”

Syria’s civil war, which entered its fourth year last month, has killed more than 150,000 people, but an often overlooked figure is the number of wounded: More than 500,000, according to the International Committee of the Red Cross. An untold number of those—there’s no reliable estimate—suffered traumatic injuries that have left them physically handicapped.

Syria’s conflict is not unique in this regard. All wars maim and kill. What varies is the weapon associated with the carnage. In Cambodia, it was land mines. In Iraq, roadside bombs and suicide bombings. In Syria’s case, the culprit is largely artillery and airstrikes.

It was shrapnel from a government airstrike in November 2011 on the town of Deif Hafer in Aleppo province that tore off part of Ahmad’s leg.

“When I first woke up in the hospital, I felt pain and I knew my leg was gone,” said the shy 19-year-old with a mop of dark hair. “I felt that I was done. I could no longer walk or work or go out. It was me and my bed. I lost all hope.”

With few options in Syria, Ahmad initially relied on crutches to get around. He and his father later cobbled together a homemade prosthesis out of plastic and socks. He used it for six months before tossing it aside.

“It wasn’t very comfortable,” he said. “It hurt my leg, and it was short so I limped when I walked.”

As violence ravaged northern Syria in early 2013, Ahmad, his parents and 11 siblings left Deir Hafer for Lebanon. They now live at the edge of a plowed field in a cluster of flimsy shelters hammered together out of wood, nails and plastic sheeting outside the town of Jib Janine in the Bekaa Valley.

He received his new prosthetic leg from Handicap International, a non-governmental organization that, among other things, helps Syrian refugees in Lebanon and Jordan who have lost limbs in the war.

“The hardest thing in the past two years was feeling that I didn’t have anyone. It was over for me, I felt that I was done. I was thinking I’d never get a leg and would never be able to walk again,” he said. “Now that I got the leg, I can get a job, go and come as I please, see my friends.”

Once outside the tent, Ahmad slowly limped down a dirt path running along a small ditch. Old men and women observed quietly from their tents. Children scampered across the dusty earth to catch his every move.

The amount of time needed to adjust to a new limb varies, said Henri Bonnin, a field director for Handicap International. Older adults generally struggle more than young people, as do amputees who lose their leg above the knee. Another determining factor is the quality of the original surgery, which varies widely in a conflict like Syria’s where many amputations take place in a field hospital or makeshift clinic.

“These are emergency amputations, so it’s not an orthopedic surgeon, it’s a general surgeon or a dentist who is performing this,” Bonnin said. “It’s done in a severe emergency to save a patient’s life.”

Under such conditions, many doctors cut the bone straight across, not at an angle as they should to create a better stump, he said. If the stump is flat instead of cylindrical, patients need a second or third surgery—a painful procedure—to correct the problem and allow for a prosthesis.

The physical toll is grueling and apparent to all. But just as difficult for many Syrians is the psychological side of losing a limb.

That has been the case for 34-year-old Reem Diab. On Oct. 25, 2012, a shell slammed into her house in the town of Khan Sheikoun in central Syria, killing her husband, Mustafa, and her 15-year-old daughter, Batoul.

For months afterward, Diab was an emotional wreck. Her hair was falling out. Simple tasks proved overwhelming.

But what also haunted her, she said, was the fear that her surviving daughter and two sons would be terrified of their mother and the stump that ended just below her right hip. She refused to see them, and sent them to live with their uncle and grandmother instead.

“Psychologically, I was not welcoming of anyone, not even my children,” Diab said. “I did not want them to see me in this situation and not be able to cope with it.”

She came to Lebanon two months after her amputation, and was fitted with a prosthetic leg in April 2013. A physiotherapist and psycho-social worker from Handicap International visited her for more than a dozen sessions to help with her physical and mental rehabilitation. She slowly adjusted to the prosthesis, although it’s been difficult.

“It’s not like your actual leg,” she said. “It feels like a strange object. There’s no balance.”

She now lives with her children in a tent set up on the roof of a building in Chtaura, Lebanon. Her mother, father, five brothers and their families share the rooftop with them, cramming into a few rooms slapped together from concrete blocks.

Urged on by a physiotherapist, Diab limped down the concrete stairs and into the dusty street outside, where she hobbled along the pavement, wincing as she walked.

“My children got used to seeing me with the prosthetic,” she said. “They asked me things like, ‘Why did you leave us?’ But they’re happy that I can walk now.”

Syria, before the bombs fell

Read Next
Fear of flying? Not Kim Jong-Un
EDITORS' PICK
Malls adjust ‘NCR Plus’ operating hours for April 12-30 MECQ
Metro Manila to have shortened curfew hours from 8 p.m. to 5 a.m. under MECQ
Pre-order the new vivo Y20s [G] to get a free TWS earphone
Pru Life UK receives four golden arrows for solid corporate governance
‘NCR Plus’ to be under MECQ starting April 12 until April 30 — Palace
Speed up your game with the new vivo Y20s [G]
MOST READ
Stop ‘creeping occupation’ of ‘militia’ boats in WPS, Pacquiao asks China
Bea Alonzo clarifies status of her relationship with Dominic Roque
Convicted former aide of Sen. Bong Revilla dies — BuCor
Locsin to China: ‘Then move out’
Don't miss out on the latest news and information.