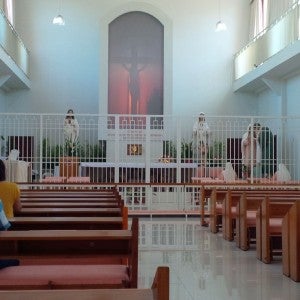 Cloistered nuns pray inside the Little Souls church in Tagaytay City on March 1, 2014. In the days leading up to April 8, when the Supreme Court hands down its final decision on the controversial RH law, an “Oratio Imperata” for the protection of the family and human life will be said in every Mass and church bells will peal across the country to signify the Church’s continuing opposition to the law. PHOTO BY RICK ALBERTO

MANILA, Philippines—A group opposed to the reproductive health (RH) law on Tuesday said it was expecting a narrow victory when the Supreme Court hands down its final decision on the controversial measure, with two magistrates “making the difference.”

At a church forum held on Tuesday, Pro-Life Philippines president Eric Manalang told reporters that if their “reading” was right, the high court would decide in favor of the anti-RH camp but the margin “will be very slim.”

“There are two justices who will probably make the difference. [But I don’t want to name them] because I don’t want them to be put on the spot,” he said at the forum hosted by the Catholic Media Network in Intramuros, Manila.

On April 8, the day the Supreme Court is expected to render its decision on the controversial measure, Pro-Life Philippines and other anti-RH groups will be in Baguio City for a procession and prayer vigil, Manalang said.

The Supreme Court holds its summer sessions in Baguio because of the cool climate.

“We are ready to do what we are used to doing, which is holding a procession around the venue and praying,” he said.

In the days leading up to April 8, an “Oratio Imperata” for the protection of the family and human life will be said in every Mass and church bells will peal across the country to signify the Church’s continuing opposition to the RH law.

Manalang also encouraged the public to bring out red ribbons as a sign of protest against the RH law.

“They could put it on their gates, bags, cars. They could wrap it around their arms,” he said.

“Actually, we did this two or three times in the past, but some churches took them (ribbons) off. It would have been better to keep them on to let the people know that the fight is not over. It is not a lost cause even if some people think it is. You never treat life as a lost cause,” he said.

Under the RH law the state will fund sex education in the public schools, provide couples with contraceptives and offer mothers reproductive health options.

The law was signed by President Aquino in December 2012 but it has yet to be implemented after a status quo ante order was issued by the Supreme Court last year after some groups filed petitions against it.