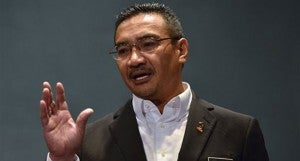 KUALA LUMPUR – Malaysia’s authoritarian government, which has been under harsh global scrutiny over the handling of its missing-plane drama, said Tuesday it would compile “false” media reports over the crisis and consider filing lawsuits.

Transport and Defence Minister Hishammuddin Hussein said on his Twitter feed the country’s attorney general had been instructed to “compile evidence and advise” on possible legal action.

Earlier in the day Hishammuddin was quoted by the Malay Mail newspaper as saying: “We have been compiling all the false reports since day one. When the time is right, the government should sue them.”

The MH370 saga and resulting world attention has put Malaysia’s long-ruling government — which muzzles its own pliant mainstream press — in the unaccustomed position of having to answer tough questions from reporters.

Hishammuddin, who has run the government’s near-daily briefings on the situation, has repeatedly denied various anonymously-sourced reports revealing details of Malaysia’s investigation into the March 8 disappearance of MH370 with 239 people aboard.

He took particular aim on Monday against British tabloid the Daily Mail, which at the weekend quoted a “source close to the family” of pilot Zaharie Ahmad Shah as saying police had learned he was emotionally unstable before the flight amid alleged marital trouble.

“I can confirm to you that the information did not come from the police and you should ask Daily Mail how they get the information,” Hishammuddin said tersely when asked about the report.

In a Facebook comment reported by local media, Zaharie’s daughter Aishah Zaharie accused the Daily Mail of “making up” the report.

The Daily Mail also reported earlier that Zaharie was said to be a fanatical supporter of Malaysia’s political opposition. Friends and acquaintances have denied that.

Suspicions have fallen on Zaharie, 53, and his co-pilot Fariq Abdul Hamid after Malaysian officials said the plane was believed to have been deliberately diverted by someone with flying knowledge. But nothing has emerged to suggest either had any motive to go rogue.

The ruling Barisan Nasional coalition in power since independence in 1957 has a poor record of transparency, routinely sweeping corruption scandals and other embarrassments under the rug.

Malaysia’s independent web-based news organisations are largely unfettered due to a promise by the government in the 1990s not to censor the Internet, but their reporters say they are routinely harassed or blocked from government press briefings.