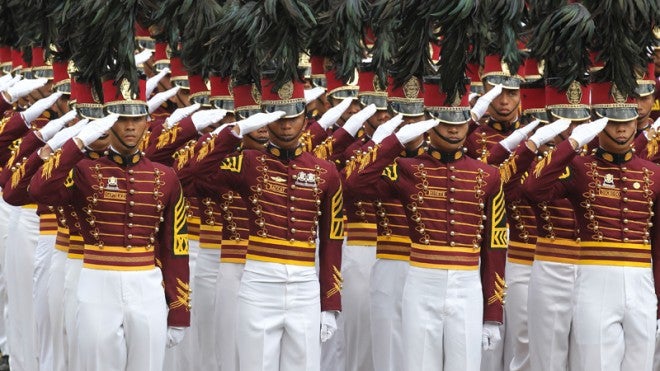 MANILA, Philippines—The “fried chickens” have had enough of the “crispy patas” in the police service.

Rosendo Dial, PNPA Alumni Association Inc. chair, said Monday the group’s board of directors had approved a resolution seeking the help of Interior Secretary Mar Roxas in reviewing the current system of appointment of senior police officers to major positions in the Philippine National Police.

Roxas is an adopted member of PMA Class 1984.

Dial, the former chief of the Bureau of Jail Management and Penology, said the letter was a reiteration of a similar communication the association sent to PNP Director General Alan Purisima last year.

“What we are asking is for the national leadership [of the PNP] to implement an equal distribution of senior PNP officers from the PNPA and the PMA to key positions in the PNP,” Dial told the Inquirer on the sidelines of the 35th PNPA commencement exercises at Camp Gen. Mariano Castañeda in Silang town, Cavite province.

“We just hope that senior police officers who are products of the PNPA are also given the same chance afforded to PMA alumni who now head various units in the PNP,” he added.

He said the inequality in the promotion of senior police officers had led to the “demoralization” among some graduates of the PNPA.

“There’s a growing demoralization because they see that there’s no equal chance for them to land a good position in the PNP,” he said.

Although the present number of PNPA graduates in active service was almost 10 times more than the remaining PMA graduates, he lamented that products of the police academy had been bypassed in promotions in the PNP.

At present, there are only three PNPA graduates—all belonging to PNPA Class 1983—with the rank of chief superintendent, a star-rank position equivalent to brigadier general in the military.

On the other hand, about 150 members of PMA classes 1981 to 1984 are holding the rank of chief superintendent or higher.

“If you look at the police organization, the PMA alumni are the minority in the PNP while the PNPA graduates belong to the majority. But in terms of position, PMAers hold the highest positions in the PNP,” Dial lamented.

“By the time they are promoted to chief superintendents, PNPA alumni are close to their retirement age already. So there’s no more time for them [to lead a PNP unit]. Their promotion is too late.”

In interviews with the Inquirer, several PNPA graduates expressed their discontent over the process of promotion and designation in the police service.

Some of them admitted that they had been “forced” to seek the “blessing” of influential politicians, businessmen and even religious groups just to get major assignments in the PNP.

“For the past years, we have been expressing our displeasure regarding this discriminatory practice in the promotion of senior police officers through legal means. But our pleas fell on deaf ears,” said one of the griping PNP officials.

“The worst we can do is to have a sit-down protest. But if we do that, our careers would surely be put to waste,” he added.

Last year, the PNP Directorate for Human Resource and Doctrine Development formed a technical working group to study the reentry of PMA graduates into the PNP based on a proposal made by the PMA Alumni Association Inc. (PMAAAI).

The PNP defended its decision to consider the suggestion of the PMAAAI, with PNP spokesman Chief Supt. Reuben Theodore Sindac comparing graduates of the PNPA and the PMA to “fried chicken” and “crispy pata.”

“We should define the PMA as a leadership school [that] develops leaders. The PNP would like to avail itself of the leaders being produced by the PMA,” Sindac said.

Referring to the popular deep-fried pork leg dish, he said: “The PNPA is also a leadership school but maybe it might not be enough. We want to have a variety of [sources for officers]… so it will not be all just fried chicken. We will also have crispy pata.”

Sindac said the “education, formation and training at the PMA are different.”

“With this gloomy prospect for PNPA graduates, even with their sheer superiority in numbers, they are coerced by the naked power of the minority to seek political patronage or even seek the endorsement of perceived religious heavyweights in order to be given a modest position in the PNP,” the group said.

“[The] counterpart of PNPA Class ’83, that is, the PMA ’83, is very fortunate to occupy eight key positions in the PNP and none for the four PNPA graduates,” it said.

“It is alarming to note, however, that eight key positions in the PNP are being occupied by PMA ’84 and none for the four PNPA Class ’83,” it added.

The group said Roxas, also the chair of the National Police Commission, “is perceived to ‘level the playing field’ and probably the only hope of non-PMAers to champion their ultimate dream” of being appointed to key posts in the PNP.