Baseball caps could not hide faces of Mall of Asia robbers 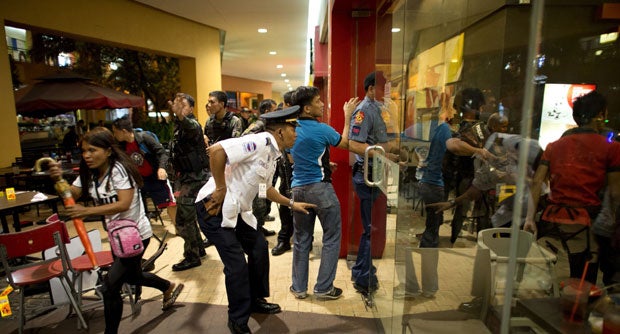 Diners rush from a restaurant as an officer from the Philippines police moves towards the scene of an attempted robbery on a jewellery store inside one of the world’s largest shopping malls in Manila on March 30, 2014. AFP

MANILA, Philippines — The robbery inside the SM Mall of Asia in Pasay City on Sunday night was de ja vu for the management of the SM Supermalls, bringing back memories of the jewelry store heists also in SM malls and in the same jewelry store chain.  But this time, the robbers used pipe wrenches instead of hammers, the signature weapons of the group tagged by the police as the “Martilyo Gang.”

At least 10 robbers carrying pistols and pipe wrenches broke past the supposedly tight security of the SM Mall of Asia shortly after 7 p.m., creating chaos and panic among Sunday shoppers.

Some shoppers scrambled towards the exit, others hid in mall stores, which closed down immediately after the shots were fired.

Police said one suspect was arrested while another was believed to be shot during an exchange of fire between the robbers and the authorities. An employee of an ice cream booth suffered a grazing bullet wound.

Chief Supt. Jose Erwin Villacorte, Southern Police District director, said that based on the footage caught by the security camera of SM MOA, at least two of the men carrying short firearms walked through the usual security check at the entrance into the department store of the SM Mall of Asia.

Other men went through the exit and pulled off the heist in a matter of seconds.

“Based on the CCTV, there are 10 people involved. Some stood guard carrying pistols, others were scooping out jewelry from the glass cabinet,” Villacorte said.

The robbers hit F & C Jewelry Store, the same chain attacked by robbers in two previous heists in other SM Malls — in SM North Edsa in December 2013 and SM Mega Mall in January 2013.

Before smashing the glass cabinets of F & C, located on the ground floor of the department store at the south wing of the SM Mall of Asia, robbers fired shots into the ceiling.

“They did that probably on purpose to scare people away. But it caught the attention of our policemen,” Villacorte said.

Villacorte said four policewomen led by PO1 Juliet Macabadbad fought the robbers as they were about to flee.

The police official believed that one of the fleeing robbers was wounded because a roving policeman found a blood-stained polo shirt with two holes believed to have been caused by bullets.

“We are checking hospitals and clinics near SM MOA where one of the robbers might have been treated for bullet wounds,” Villacorte said.

Police later learned that one mall employee identified as Brando Abdula, 20, of Spike’s Frozen Treats was hit by a stray bullet. He was confined at the San Juan De Dios Hospital and was said to be out of danger.

A suspect identified as Ryan Bansawan, 26, was consequently arrested by responding policemen immediately after the robbery. A .45 caliber pistol was recovered from him.

On the ground floor of the department store where the heist occurred, members of the Scene of the Crime Operatives (SOCO) found two pipe wrenches, two spent shells of .45 caliber pistol and one empty black bag the robbers could have left.

Outside the department store, 11 fired cartridges of 9 mm pistols were recovered.

“Even if most of the robbers were wearing baseball caps, the footage of the security cameras could still identify them,” Villacorte said.

Villacorte said the investigators were still finding out the worth of the jewelry that was taken by the robbers, as of Monday.

Police probers were likewise curious as to why the same jewelry store chain had fallen victim to the robbers.

“Perhaps, SM should consider where to position jewelry stores. Should it be at the ground floor which is easily accessible to robbers?” he said.

The police are also checking the DYI store on Macapagal Avenue in Pasay where the robbers could have bought the pipe wrenches used in the crime.

Robbery charges will be filed against the arrested suspect and nine other John Does, according to the police.

Hammer-wielding robbers cause chaos at Philippines’ Mall of Asia