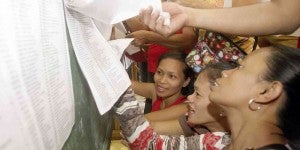 MANILA, Philippines—The  Commission on Elections (Comelec) is “on track” in its preparations for the registration of about three million new voters nationwide, scheduled from May 6, 2014 to Oct. 31, 2015, according to Comelec Commissioner Al Parreño.

In a text message to the Philippine Daily Inquirer, Parreño said on Monday that the poll body “is ready to accommodate new voters” for the 2016 presidential elections.

“We anticipate an influx of newly qualified registrants” in various parts of the country, he also said.

Parreno, who is set to replace Commissioner Lucenito Tagle as head of the Comelec committee on overseas voting next February, urged young new voters to register.   “Make sure they register,” Parreno called on the public in his text message.

“Election issues affect the youth as the outcome of elections will surely impact their lives for years to come,” he emphasized.

He also stressed “democracy will work best if citizens, young and old, are active in the electoral process.”

“The Constitution states that sovereignty resides in the people. There is no better way for the people to show their sovereignty than to elect their leaders,” he added.

Commissioner Grace Padaca asserted “it is every Filipino’s moral duty to vote for the right leaders of their country…Elections give the people the opportunity to choose who will govern them.”

“However, in order for them to vote, they must first register,” said the former Isabela governor.

Both Padaca and Commissioner Luie Tito Guia said the next voters’ registration program would be “big deal” for the poll body as it has set the goal of getting more qualified voters to register during the nearly 18-month drive.

Aside from young new voters, the Comelec will give “special attention” to the so-called “vulnerable sectors, referring to persons with disabilities, or PWDs, senior citizens and detainees, among others.

Padaca explained that “for the first time, PWDs and senior citizens will be given a choice which polling places are more accessible to them.”

“They will have the option to have their names transferred to a more accessible election precinct where they will be more comfortable,” she said.

During the registration period, “they will be asked to signify in their registration forms that they have a particular disability of what type of assistance they would need during the actual elections in 2016, as well as indicate if they choose to vote in more accessible polling places instead of their regular polling precincts.”

“All these are in accordance with the new law, Republic Act. No. 10367 (otherwise known as the Act providing for Mandatory Biometrics Voters Registration),” noted Padaca.

Of the 52.04 million registered voters nationwide, more than 7.3 million have no biometrics, according to Comelec records.

The biometrics data, which consist of digital fingerprints, photo and signature, aim to clean up further the agency’s voters’ list.

Earlier, the Comelec announced that its local offices will be open even on Sundays to accommodate voters who will register for the 2016 polls.

Guia told this paper that “from the 2013 figures (of more than 52 million voters), we’re seeing an increase of about three million new voters, or a projected total of over 55 million voters in 2016.”