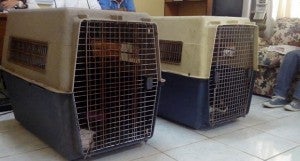 The pets of Communist Party of the Philippines chairman Benito Tiamzon and his wife Wilma were presented to the media on Thursday at the Central Command in Cebu. The pets were with the couple during their arrest on March 22.

CEBU CITY, Philippines—Benito, Wilma and Joma have been freed.

No, they are not the top leaders of the Communist Party of the Philippines-New People’s Army (CPP-NPA).

They are actually the two dogs and a cat that were under the military custody after they were recovered during the arrest of their owners—Benito Tiamzon and Wilma Austria, CPP-NPA chair and finance officer– in Cebu last week.

The soldiers, who were taking care of them while they were at  the Armed Forces Central Command, nicknamed the two male dogs as Benito and Joma and the female cat as Wilma, after the two top leaders of the CPP_NPA and Jose Maria Sison, its founding chair.

The two dogs and the cat were with the Tiamzons and five others when they were arrested in two separate vehicles at a checkpoint in Aloguinsan town, Cebu on March 22.

But Centcom decided to release the pets to an animal welfare group in Cebu despite earlier pronouncement by their chief, Major General John Bonafos that the military was willing to adopt them.

Lt. Jim Aris Alagao, Centcom information officer, said they decided to turn over the pets to the Island Rescue Organization (IRO), to ensure that the animals would be taken care of well.

“They can take care and look after them and they have more experience compared to us,” he said.

IRO is a Cebu-based non-government organization that helps abused, maltreated and neglected animals in Central Visayas.

Alagao said Nina Hernandez, IRO founder and executive officer, called him up to inquire if they could donate food for the three pets.

He then asked her if they would be willing to take care of the pets. She agreed.

On Friday, Alagao turned over the pets to Hernandez.

Four other pets of the rebel leaders—two dogs and two cats that were left at the CPP leaders’ safehouse in San Fernando town, southern Cebu—would also be turned over to IRO.

Hernandez told the Philippine Daily Inquirer that the names of the two dogs werte actually “Nimbus” and “Moshi” while the female cat was “Goji”.

Hernandez told the Inquirer in a phone interview that she had talked to Ian Manticajon, lawyer of Tiamzons, about the temporary custody of their pets.  The two dogs and a cat are now at the IRO center.

Wilma, she added, was asking about the condition of her pets.

“They (Tiamzons) were very appreciative that we took temporary custody of their animals,”she said.

Hernandez said the pets were “well taken care”of and  “wel-groomed.”

She added they were also working to get the permit to enter the Tiamzon safe house in San Fernandez so they could get the four other pets.

According to Hernandez, IRO has no authority to put these pets up for adoption unless the Tiamzons release the ownership of the animals.

When reached for comment, Manticajon of the National Union of People’s Lawyers, said the pets were not owned by the Tiamzons but by Rex Villaflor and his wife, Lorraine and Arlene Panea who were arrested with the CPP-NPA leaders last week.

He said the Villaflors and Panea authorized him and Manila-based Rachel Pastores of the Public Interest Law Center to facilitate temporary care of their pets.

In the handwritten authorization letter dated March 28, the three said three dogs and four cats were in the custody of Centcom.

Four other pets were left in their home in San Fernando, the letter said.

“We further authorize our lawyers to facilitate the release of our pets from Centcom Cebu’s custody and talk to IRO for possible transfer, care and custody (of the pets),” the letter said.

Manticajon said they would have to trace where the other pets were.

But he added they would also inform their clients that only Goji, Nimbus and Moishi were turned over to IRO.