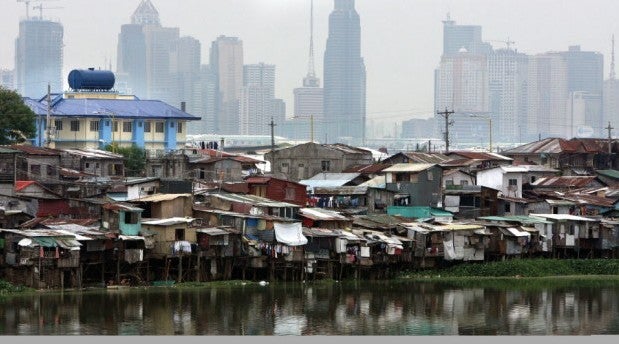 WATERWAY HAZARDS Shanties hug the floodway banks in Pasig City. In the background are the high-rise condominiums of Eastwood in Libis, Quezon City. The government has announced it is ready to relocate residents living along the waterways of the metropolis. EDWIN BACASMAS

MANILA, Philippines—After five months cleaning up more than 100,000 square meters of public markets in Manila and its suburbs,  the Metropolitan Manila Development Authority has wrapped up its “Linis Palengke” program.

On Friday, the MMDA announced in a statement that it was shelving the wet market cleanup program, launched last October, to devote its resources to clearing waterways (esteros) before the onset of the rainy season in June.

The MMDA cleanup also involved orienting market vendors and other personnel on the rudimentary principles behind Republic Act 9003 or the Ecological Solid Waste Management Act, as well as the donation of garbage bins, utility carts, aprons, and compressor washers.

The MMDA is now preparing for its annual waterway unclogging called “Estero Blitz,” which will begin this April.

The MMDA’s “Estero Blitz” program is now in its fourth year, having been launched in August 2011.

MMDA to help in cleanup of public cemeteries in Metro Manila