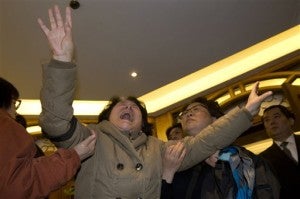 A relative of one of the Chinese passengers aboard the Malaysia Airlines jet, MH370, grieves after being told of the latest news in Beijing, China, Monday, March 24, 2014. AP FILE PHOTO

Flight 370 disappeared March 8 while bound from Kuala Lumpur to Beijing. Investigators believed it crashed in the southern Indian Ocean, where planes and ships have been looking to recover any debris.