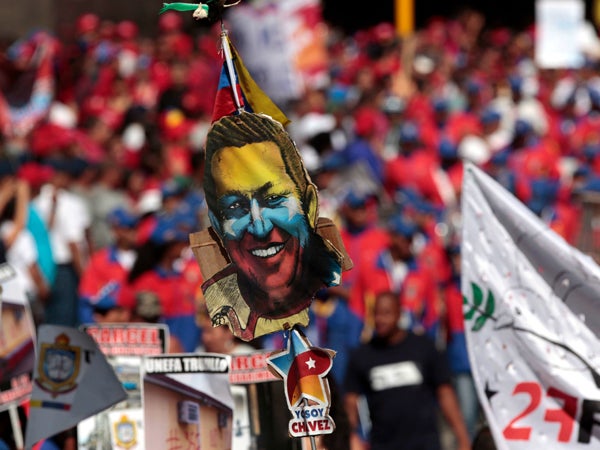 A student waves a banner decorated with an image of Venezuela’s late President Hugo Chavez at a gathering between President Nicolas Maduro and students in Caracas, Venezuela, Saturday, March 22, 2014. Two more people were reported dead in Venezuela as a result of anti-government protests even as supporters and opponents of Maduro took to the streets on Saturday in new shows of force. AP

CARACAS, Venezuela — The Vatican says it’s willing to help facilitate talks between Venezuela’s government and its opponents aimed at ending weeks of deadly unrest that have paralyzed much of the country.

President Nicolas Maduro on Thursday said he was willing to sit down with the opposition under the watch of an outside observer. He floated the name of Vatican Secretary of State Cardinal Pietro Parolin, who served as the Holy See’s ambassador to Venezuela before being called to Rome last year.

The Vatican spokesman, the Rev. Federico Lombardi, told The Associated Press Friday the Holy See and Parolin were “certainly willing and desirous to do whatever is possible for the good and serenity of the country.” He said Parolin, in particular, “knows and loves” Venezuela. But he added that the Vatican needed to understand the expectations of its intervention and whether it could bring about a “desired outcome.” Such a study is underway, he added.

Catholicism is a touchstone for critics of Maduro’s socialist administration, and opposition leaders Leopoldo Lopez and Henrique Capriles, both known to sport rosaries, have been pressing the Vatican to take up the cause. Maduro also heaped praise on Pope Francis after meeting with the first Latin American pontiff last year.

Although the church may be an acceptable go-between, the road to compromise in this deeply polarized nation is a long one. Hardliners on both sides continue to reject compromise even with at least 32 people killed and hundreds more injured, many of them during clashes between protesters and security forces sometimes joined by pro-government militias.

As soon as Maduro agreed on Thursday to talks with the help of an outside facilitator, several of the parties forming the opposition Democratic Unity alliance questioned the proposal, saying it could dampen the protest movement’s momentum.

Maduro has also expressed skepticism about his opponents’ motives, pointing to much of the opposition’s refusal to take part in earlier “peace conferences” proposed by his administration.

For its part, the opposition says Maduro is the one who isn’t negotiating in good faith, and want to see Lopez and dozens of jailed activists released, as well as an end to a crackdown on protests.

“The government says it wants peace, but it doesn’t respect people with different ideologies,” said Jose Antonio Campuzano, who considers himself part of the opposition, as he surveyed a candlelight vigil kept around the clock by protesters at the Caracas plaza where clashes with security forces have been the most violent.

“Dialogue is impossible when it’s ‘You’re with us or against us,'” he said, brushing back tears as he looked at photos of those killed during the unrest, arranged in the shape of a cross. Men and women walking by on their way to work chimed in, calling Maduro a liar and shameless.

The basic lack of trust between the parties and their conflicting goals are almost sure to doom any talks, said Michael Shifter, president of the Washington-based Inter-American Dialogue. The protesters want to remove Maduro from power while the president wants those protesting to return home. Neither side has expressed interest in finding middle ground.

Maduro may also be better off devoting his energies to shoring up support among the poor, who are also suffering the effects of 57 percent inflation and chronic shortages but have so far failed to join the protests in large numbers. For those supporters, making amends with an opposition that it doesn’t feel represents its interests is a less urgent goal than stabilizing the economy.

Yet a religious representative may have more chances of succeeding than the alternative agreeable to Maduro: regional diplomats who would be tainted by the ideological divide across Latin America, a schism in many ways fostered by late Venezuelan President Hugo Chavez’s financial support for like-minded, anti-American governments. Even if neither side wishes to compromise, it would be politically difficult to reject an envoy sent by the wildly popular Francis in a country where more than 90 percent of the population is Catholic.

While direct Vatican mediation in conflicts is rare, the Holy See’s diplomats often work behind the scenes and have helped resolve conflicts in Latin America before.

In 1978, Pope John Paul II sent an envoy to help Chile and Francis’ native Argentina reach a compromise on a territorial dispute that pushed the two countries to the brink of war over the Beagle Channel and its islands.

Francis, a year into his papacy, has so far avoided wading too deeply into regional politics, sidestepping Argentine President Cristina Fernandez’s request last year for him to help defuse the dispute between her country and Britain over the Falkland Islands.

Maduro accepted the idea of an outside “witness of good faith” to talks after a delegation of South American diplomats visited the country with the goal of bringing about dialogue.

He also vowed to tone down his rhetoric, promising to no longer deride student protests seeking to force him from offices as “Chuckies,” in reference to the diabolical doll of Hollywood fame.