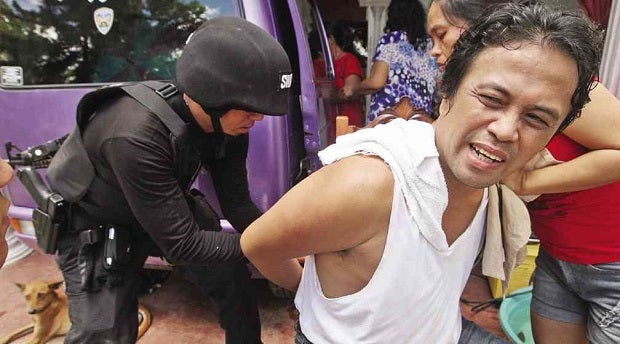 CULT leader Casiano Apduhan, 45, grimaces in pain as he is handcuffed during a raid on his residence in Balamban town, Cebu province. Apduhan is facing charges of illegally detaining a woman and turning her into a sex slave for five years, as well as the murder of a 14-year-old boy. TONEE DESPOJO/CEBU DAILY NEWS

CEBU CITY—A cult leader is facing a criminal complaint after he was accused of detaining a 33-year-old woman who was allegedly used as his sex slave for five years.

Casiano Apduhan, alias “Tatay Loloy” and known to his followers as “Dios Amahan,” also faces a murder case for the death of a 14-year-old boy whose decomposing body was found in a tunnel underneath his house in Balamban town, about 48 kilometers west of here.

The complaint for serious illegal detention was filed by the National Bureau of Investigation in Central Visayas on Thursday in the provincial prosecutor’s office.

A separate complaint for illegal possession of firearms was filed after NBI agents found two handguns in Apduhan’s house during a raid on Wednesday.

Another complaint for murder and human trafficking, particularly on the provision against forced labor, will also be filed against him, said NBI supervising agent Rey Villordon.

Apduhan is accused of using Angelo Repuela as a human sacrifice, supposedly for the gods to help him find gold. NBI agents found Repuela’s body wrapped in a blanket in the tunnel.

Apduhan, who is detained at the NBI regional stockade, denied the allegations, saying his followers will swear that he is a good man.

“I am innocent. I hope that I can get justice,” he said. Apduhan’s two-story house was raided by the NBI on Wednesday on the strength of a search warrant after the woman’s mother claimed that her daughter was kept against her will.

The woman was brought to a rehabilitation center where she will undergo psychological treatment and counseling, said Heda Largo, the province’s gender and development implementing officer.

“We want to know the extent of the damage [on the woman] after she has been detained for more than five years,” said Largo, also a consultant of the Provincial Women’s Commission.

NBI agents also noticed that Apduhan’s house was designed like a prison, since its lone entrance was barricaded with padlocked steel grills.

“Other doors and windows were heavily barricaded and the grills were locked. There is no way for a member of the household to escape,” Villordon said in an affidavit.

He said the dead boy’s father, Eleuterio, was a member of Apduhan’s cult.

In 2012, Apduhan offered the boy as a sacrifice for a treasure-hunting activity and promised the parents that the boy would be brought back to life in 2013, said Villordon.

Ritchie Fajardo, a former cult member, said in a separate affidavit that, on instructions of Apduhan, the boy’s body was laid on a green bed sheet and wrapped in a brown blanket with a pillow placed under the head.

The body was placed in a small cave in the tunnel and its entrance was sealed with cement.

He said that while working for Apduhan, one of the rooms in the house was off-limits to anyone except for a woman who has not been identified.

Fajardo said he left Apduhan’s house in October 2013 because he was made to do difficult tasks without pay and was sometimes beaten and punched by Apduhan.